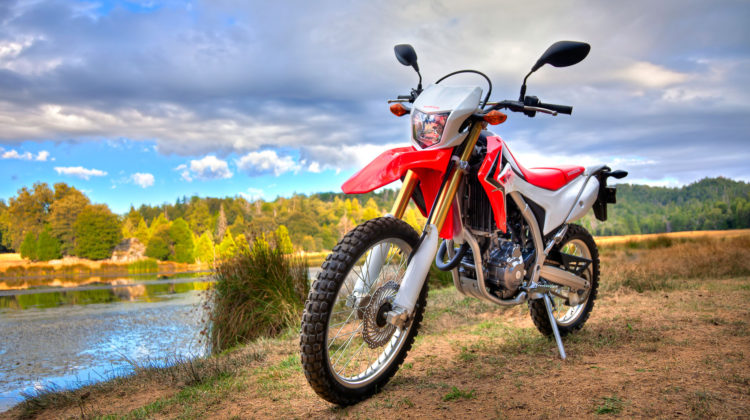 When Honda released the CRF 250L back in 2013 the price tag alone ( €4,490) suggested the bike had been built to a tight budget. Aiming their sights on entry level riders, this bike provided a cheap-to-run and efficient commuter with some amount of off-road capability. Production in Thailand went some ways to meeting the price point but it also required the selection of some “nothing-too-fancy” components to meet that cost target. 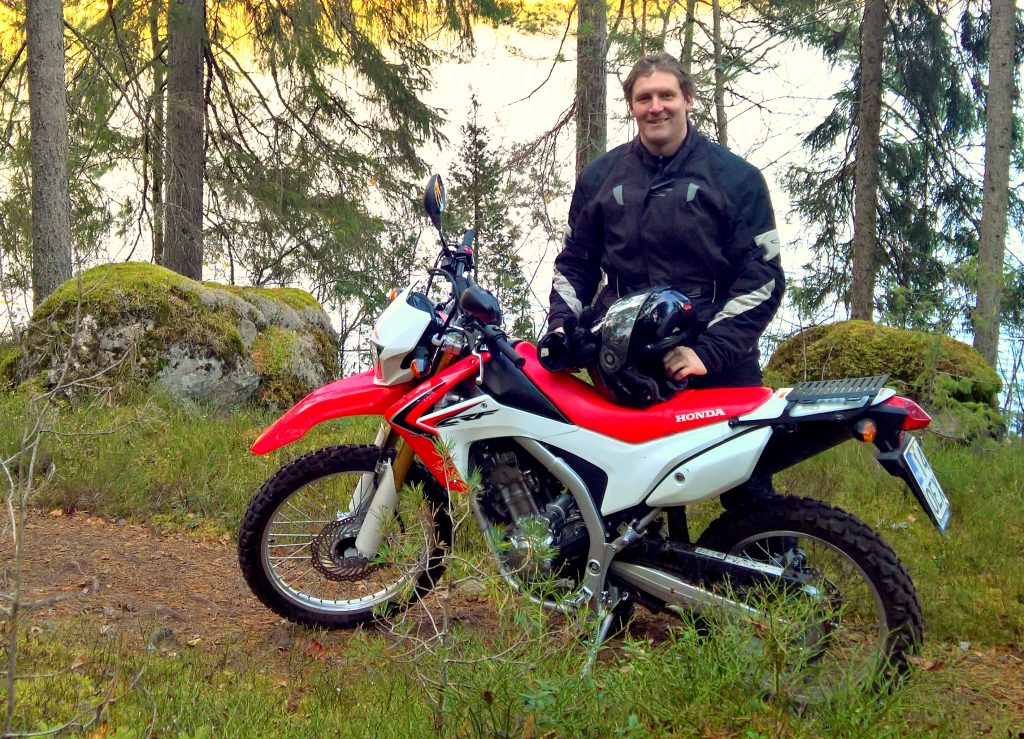 Despite all this Honda managed to deliver a quality bike second to none. The little Honda was voted 2013 Dual Sport of the year by Motorcyclist Online and voted best budget basher bike by Cycle World in the same year. A testament to the bike’s reliability has been affirmed by riders who have owned it (including myself) and demonstrated by others such as Steph Jeavons on her round the world trip riding the little 250.

Up to 2016 the bike has not changed and still is regarded as a capable novice bike. Its well-mannered characteristics make it a confidence building machine, and have led to it be labelled by some, the Golden retriever of the bike world.

The basics of the machine

The Honda CRF 250L is a Fuel injected 249 cc DOHC four stroke Liquid cooled Single cylinder thumper which delivers 20ish hp @ around 8500 RPM. It has a well-spaced 6 speed gearbox with a final gear ratio of 14T/40T. The useful Torque starts to kicks in mid-range meaning it pulls noticeably less in the lower revs but starts to delivers the goodies from upwards of 4000 rpm. 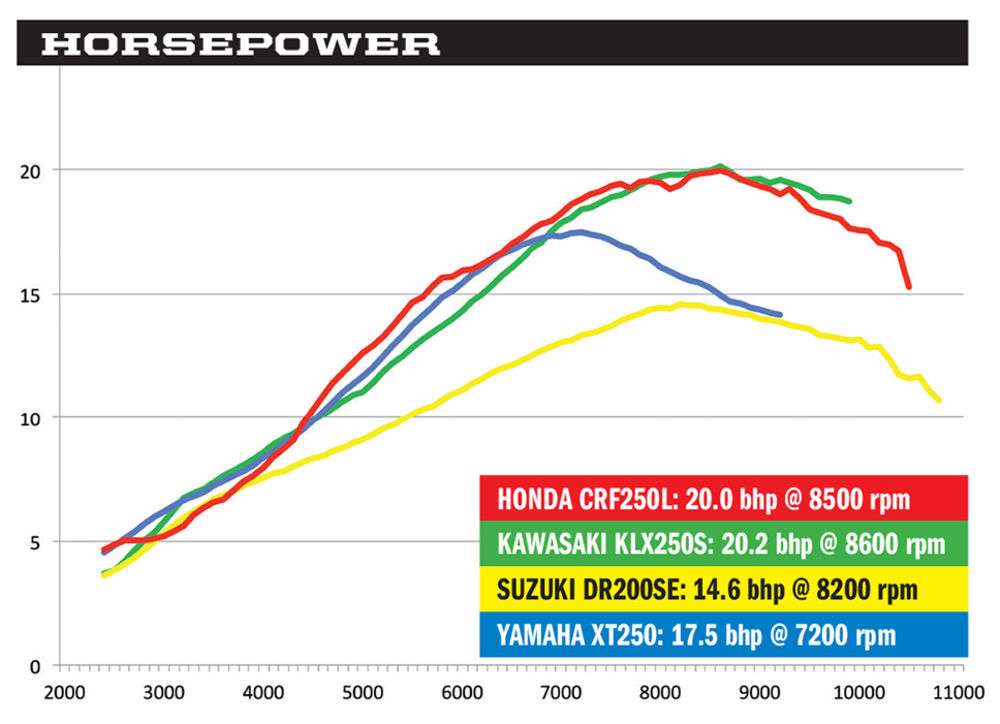 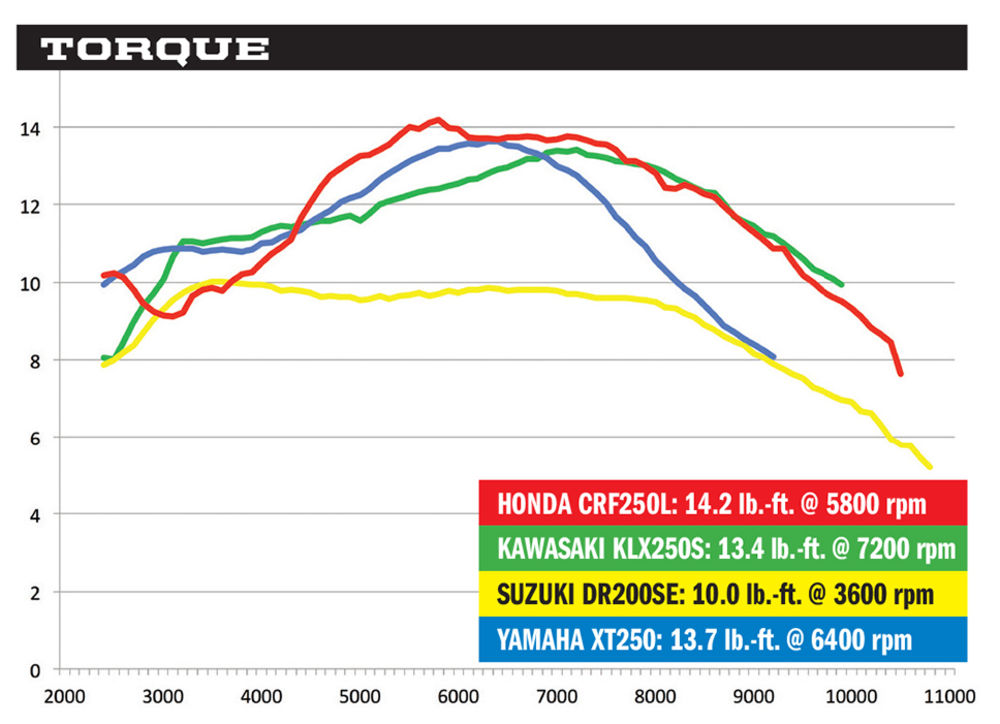 The bike weighs in at 145 Kg wet which is quite a lot for the class. Still it feels light to throw around and turns easily on the trails.

The Suspension is adequate for basic trail riding. The fork travel is 22 cm and the rear gives 24 cm. The only thing adjustable is the rear preload. It is possible to bottom out the rear but it’s not that common for most people. All in all, the suspension is adequate and anyone needing/wanting to upgrade it has probably bought the wrong bike. The seat is comfortable compared to most dirt bikes in the class but still nothing to write home about.

One of the advantages of this machine is the service interval of 12,000 km or annually. If you like your bike it’s probably worth being kind and changing the oil a bit more frequently but still, compared to the service interval of a hard core Enduro bike like the Yamaha WR250F which requires an oil change every 1000 km, the CRF 250L is an easy maintenance proposition.

The biggest complaints about the bike

In engineering, it’s all about compromise and the Honda CRF 250L is no exception. What some may see as design flaws others market as Features. The bike has been well thought out in all regards but most riders agree on the following grievances:

The Honda CRF 250L is underpowered due to a highly lean engine, a small air intake and a very restricted and heavy exhaust system. It still compares well in the class but could easily be a lot better. (Honda has made an effort here to deliver a super fuel efficient, water proof and quiet machine. They succeeded very well to the detriment of power)

Fortunately there are some aftermarket products to fix this including; an Air box modification kit to add a few more inlet holes, a K&N Air Filter that breathes a lot better, the EJK Fuel Injection Controller enabling easily adjustable mixtures and the FMF Q4 custom exhaust + Mega Bomb header pipe that reduce 4 kg of weight and produce more low to mid range power. It will set you back about €800 but delivers an extra 4-6 hp which on a small bike like this is a 20 – 30% improvement.

The bike can feel a bit sluggish in the lower gears and is not as responsive as it could be. Honda here has once again prioritized fuel efficiency over performance but this is easily and cheaply fixed with a 13T front sprocket for between €15 – €50 depending on the brand.

That one less tooth on the front should be worth about 3 teeth on the back, and does not require a different chain. This modification drops the top end speed by 5 km/h which is acceptable. Some people have put a 42T on the rear as well as the 13T on the front but I personally don’t think it is necessary.

The 7.5 litre stock petrol tank gives a range of about 200 km which means filling a little too regularly for most people. While this size tank is quite standard for endure bikes I would expect a bigger tank from a commuter/dual sport contender.

Acerbis make a 12L aftermarket tank extending the range out to 350 Km. The tanks come in black or transparent with the latter allowing you to see the fuel level in the tank. At a price of €270 per unit though you could buy quite a few 5L fuel cans from your local hardware store for that money and strap them on the back. Might not look as sexy though…

If you are shopping around for an entry level Dual sport bike, the Honda CRF 250L is best in class. You get a modern well designed bike with more performance than the competition for a lower price. Don’t mistake it for a proper 250 cc racing dirt bike like a Yamaha WR 250F because it is not and wasn’t intended to be.

I bought the bike to teach the girlfriend how to ride and to improve my off-road skills. It has been a fantastic learner bike for the girlfriend but a little under powered for myself on the trails. Having said that it is a lot easier to ride off road than my BMW 1200 GSA which gets stuck at the mere sight of mud.

Beware insurance costs as this bike is ridden by a lot of people who tend to crash it hence making it statistically higher risk for the insurance companies. Even with 20 years riding experience they still wanted to hit me up for insurance only fractionally lower than the BMW 1200.