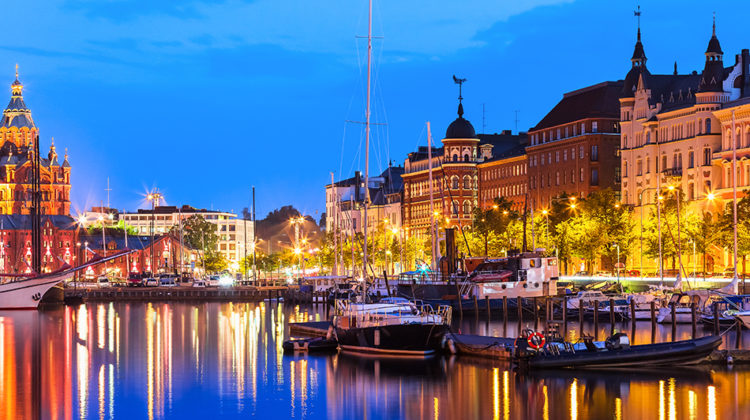 This tour requires either a bicycle or the use of public transport. It circles the city and takes in some of the more distant attractions. Feel free to pick and choose from the list as not all of the attractions may interest you.

If you plan to revisit the museums consider getting a Helsinki card as it may work out cheaper. 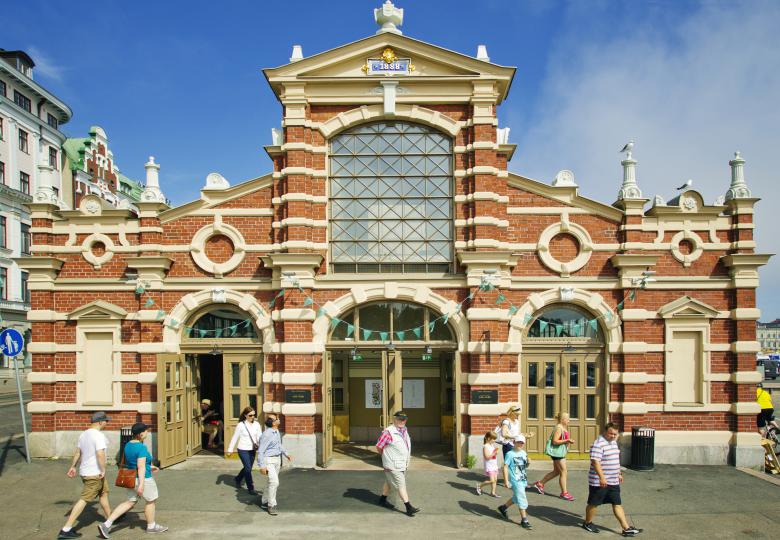 The Old Market Hall was meant to be completed in 1888 (as it states on the entrance) but due to problems with cement delivery, it did not officially open until 1889.

At the time the idea of having an indoor market was novel in Finland. City leaders hoped that an indoor marked would increase order and improve food hygiene.

The building was designed by Gustaf Nyström who had studied how Market halls were built in other European cities.

At the time of opening, the hall had 120 stalls and 6 shops in the central gallery. Today there are 25 shops in total. They sell selling fresh produce and some local delicacies. (official website) 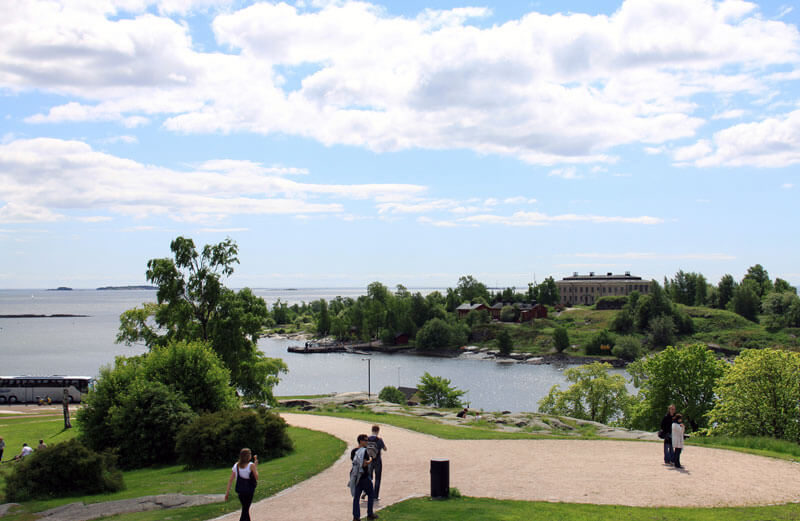 Kaivopuisto is the site of Finland’s largest annual piss-up. Come the 1st May, it is filled by tens of thousands of Finns who converge on the park to picnic and celebrate the coming spring.

The park has a hill with an observatory on it, built in 1926. The hilltop overlooks nearby islands to the south (pictured to the right). There are some old buildings and sculptures in the park and a nice walk along the shoreline.

The park was established in 1834 by a leaseholder who built a spa on the land. It later returned to the city in 1885 and has been a public park ever since.  (official website) 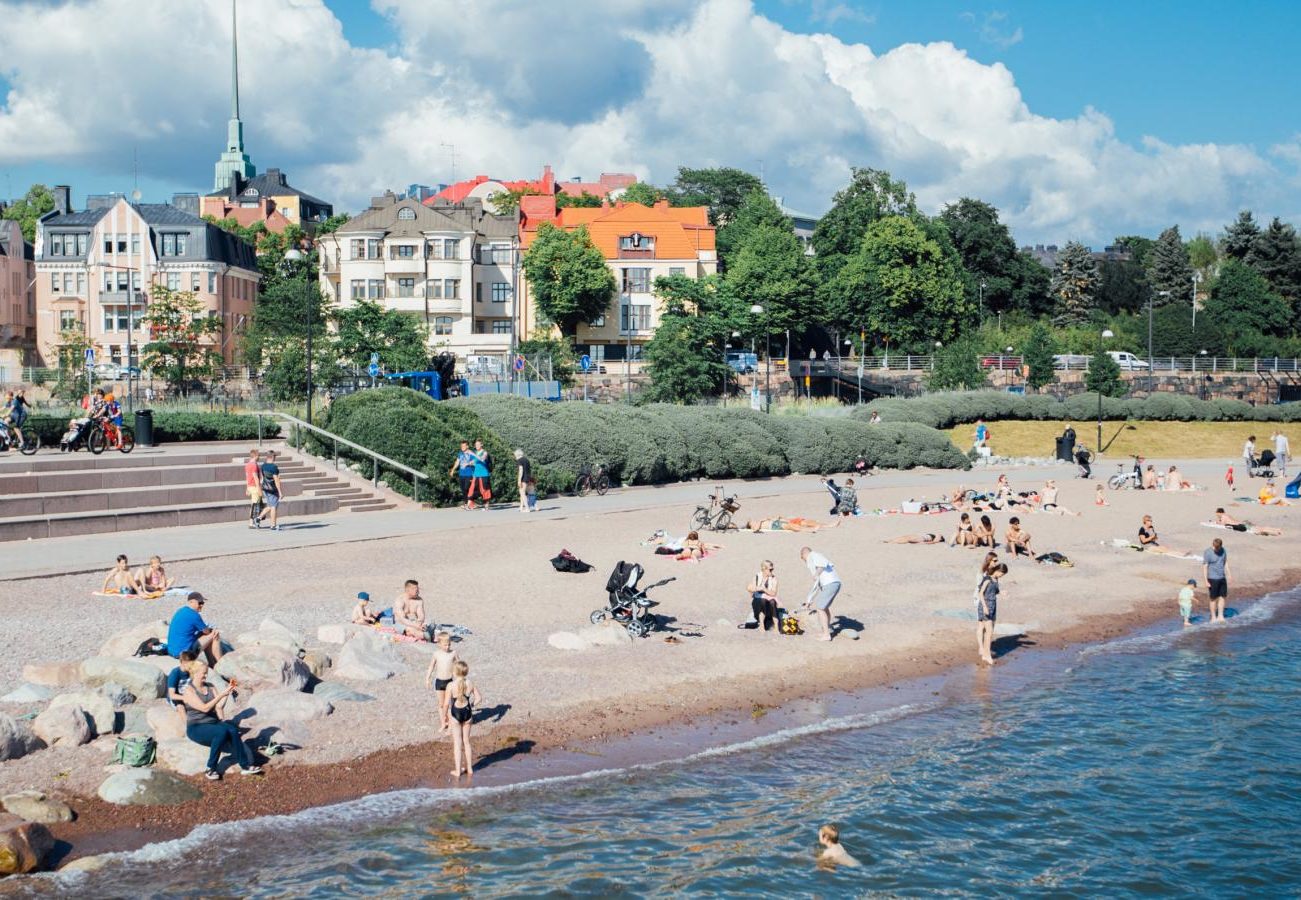 Eira is one of Helsinki’s most exclusive suburbs, boasting some of the best waterfront views.

Enjoy a stroll along the shoreline from  Kaivopuisto to Eira’s swimming beach (pictured to the right). There are several boat jetties, parks, and cafes along the way.

Small boats ferry passengers out to the adjacent islands.

Over the back to the north, you will be able to get a glimpse of St John’s Cathedral. 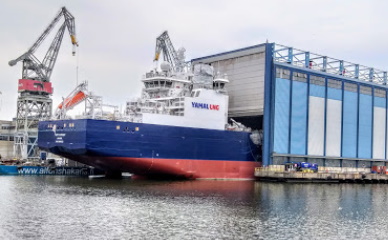 The West Harbour is the newest and most busy of the 4 harbors of Helsinki.

The harbor docks cruise ships from around the world as well as the scheduled ferries to Tallinn, Estonia and St Petersberg, Russia.

At the east end of the harbor, there is a large undercover shipyard, designed to operate all year round. The shipyard has had a turbulent past as it has struggled to economically stay afloat. It has changed hands several times and is now owned by a Russian parent company. 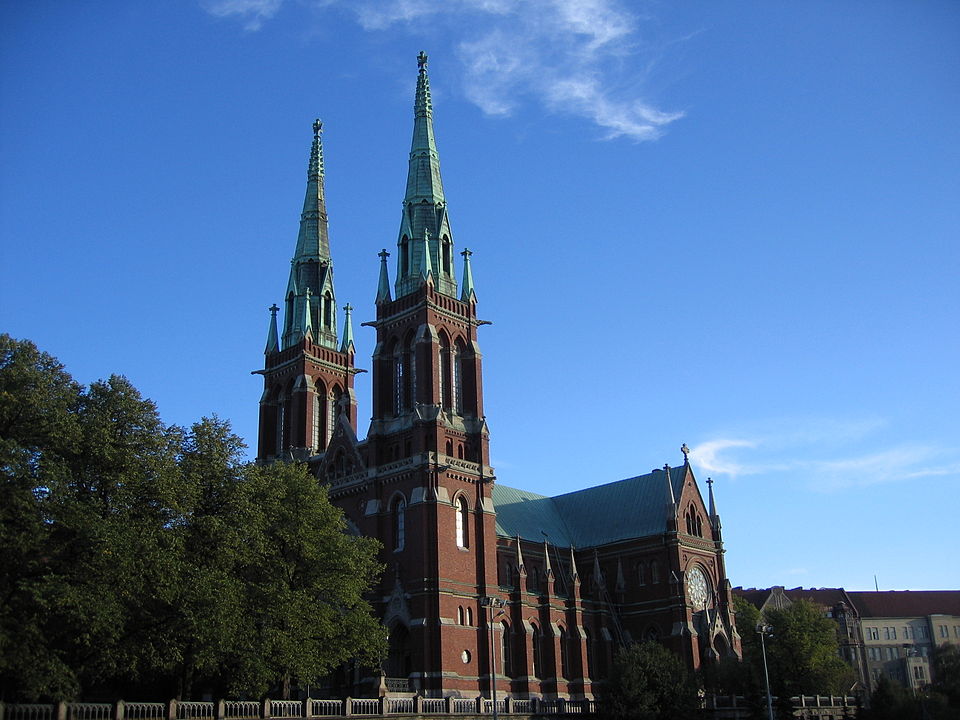 Known locally as Johanneksenkirkko, this Lutheran church is the largest in Finland by seating capacity (2600 people).

The church was designed in the Gothic Revival style by the Swedish architect Adolf Melander.  It was completed in 1891 after 3 years of construction. The roof of the church is 74 meters high.

The church is closed on the weekends and open only between 10-15 during the week. (official website) 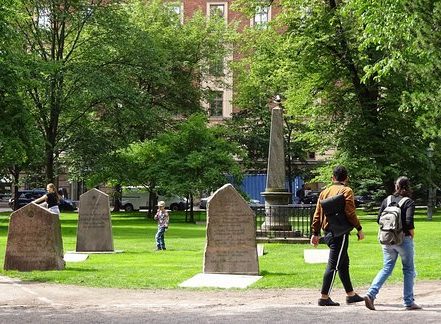 Also known as “Plague Park”, this plot of land became a resting place for most of the 1185 people who died in the devastating black plague of Helsinki in the year 1710. The population of Helsinki at the time was less than 3000.

The park later became home to the neoclassical “Helsinki Old Church” which was completed in 1826. It held the title of the oldest church in Helsinki until 2009 when the borders of Helsinki expanded, making the Östersundom Church in Sippo the oldest church.

The park is one of the key locations for Helsinki Restaurant day which is organized several times per year, but don’t let the park’s history ruin your appetite. (official website) 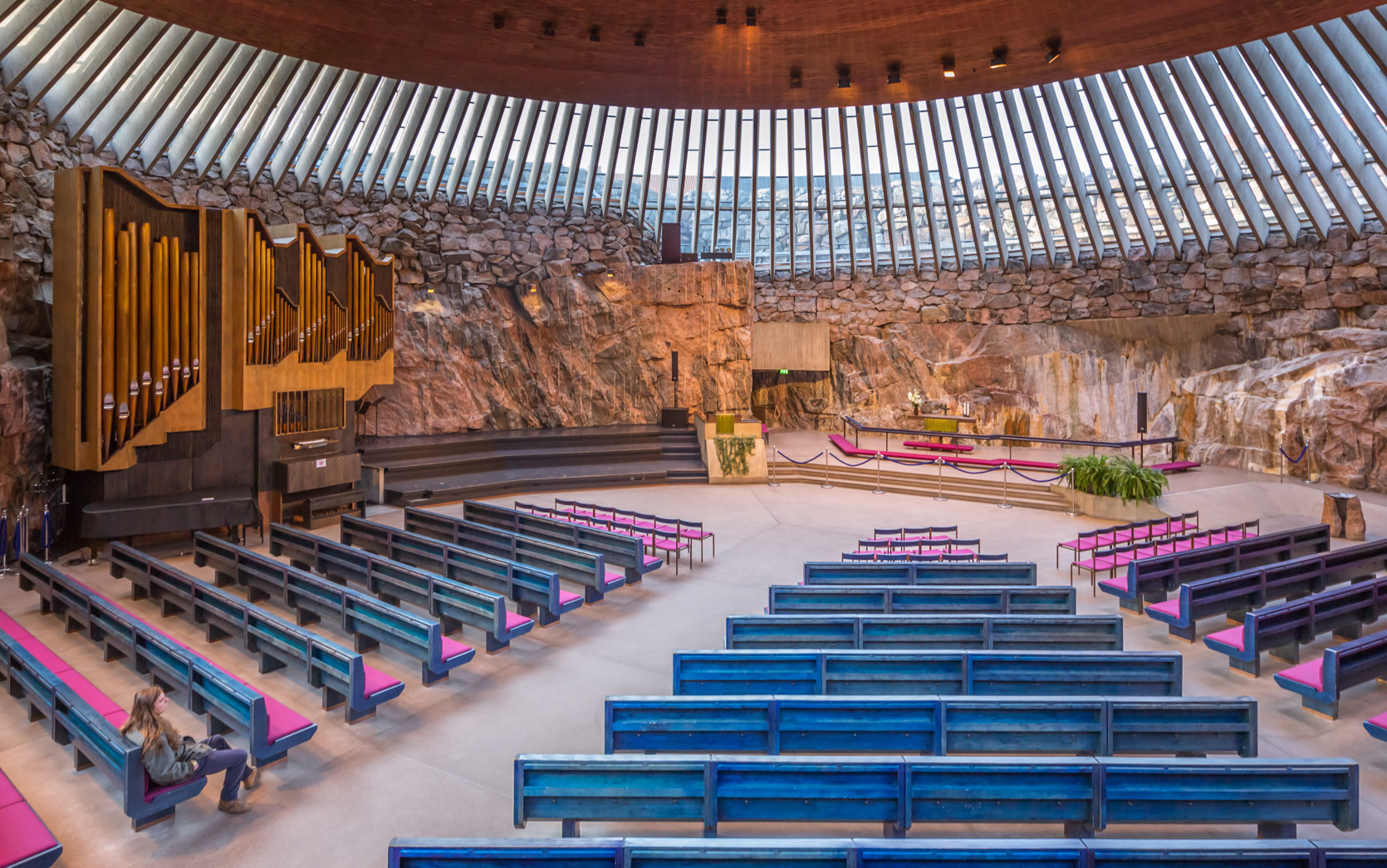 The Rock Church is a relative newcomer to Helsinki the cityscape – it was completed in 1969 and involved excavating into solid rock. The church was designed by two brothers, Timo and Tuomo Suomalainen, who were the winners of an architecture competition for the church.

The bare rock walls seen today were not in the original design, as the brothers thought it would be too radical to be selected, but on further investigation, it was discovered that the natural rock walls would improve the acoustics.

The church is one of the most popular tourist attractions in Helsinki, receiving half a million visitors per year. It is one of the few churches in Helsinki that charge an entry fee (€3). It is free to visit on Wednesdays and in the evenings. (official website) 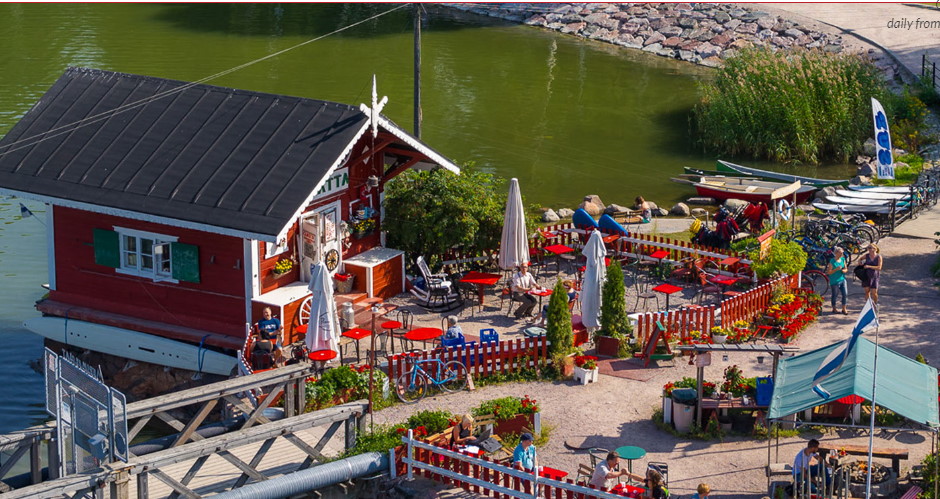 Cafe Regatta is a famous cafe on the shores of the west sea inlet of Seurasaarenselkä.

The building you see today was originally a humble fishing hut constructed in 1887. It belonging to the Paulig family, famous roasters of Finnish coffee, who had a villa close by.

The building was used for a summer cafe as early as 1952. The current Cafe Regatta was established in 2002 as a family business and is open all year round. They usually have an outside pit fire going in the winter where customers can grill sausages and enjoy the warmth.

During the summer they also operate a boat rental shop. (official website) 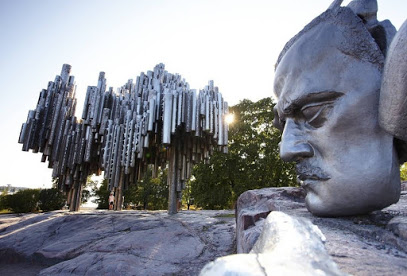 Jean Sibelius was Finland’s most famous composer. This monument built to him was designed by  Finnish artist Eila Hiltunen and unveiled in 1967, 10 years after the composer’s death.

The piece sparked a lively debate at the time as the design bore the resemblance of organ pipes and it was known that the composer had created little music for organs. Hiltunen addressed her critics by adding the face of Sibelius which sits beside the main sculpture.

The monument consists of a series of more than 600 hollow steel pipes welded together in a wave-like pattern. It weighs 24 tonnes. 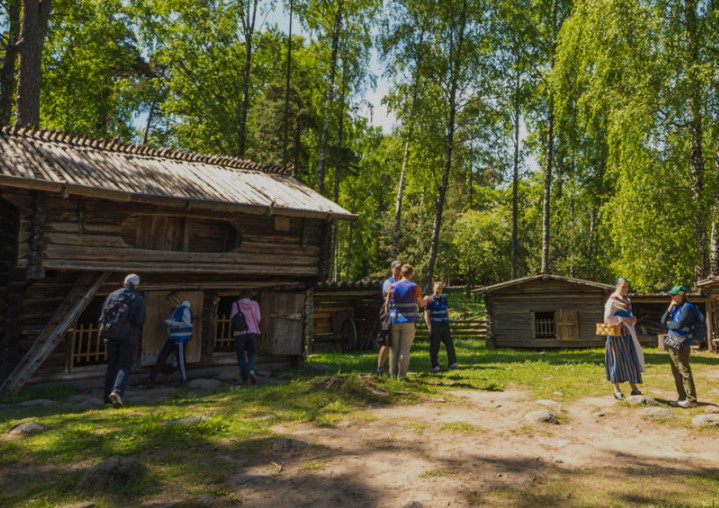 The museum consists of a collection of historically significant buildings that have been moved to the island. There is a long white bridge that gives access to the island.

Visitors are able to walk around the island free of charge but there is a fee to access the museum. The museum is closed in winter. (official website)

The island is rich in nature with places to enjoy a picnic or swim. The island also has a nudist beach which is oddly segregated into different sections for men and women. 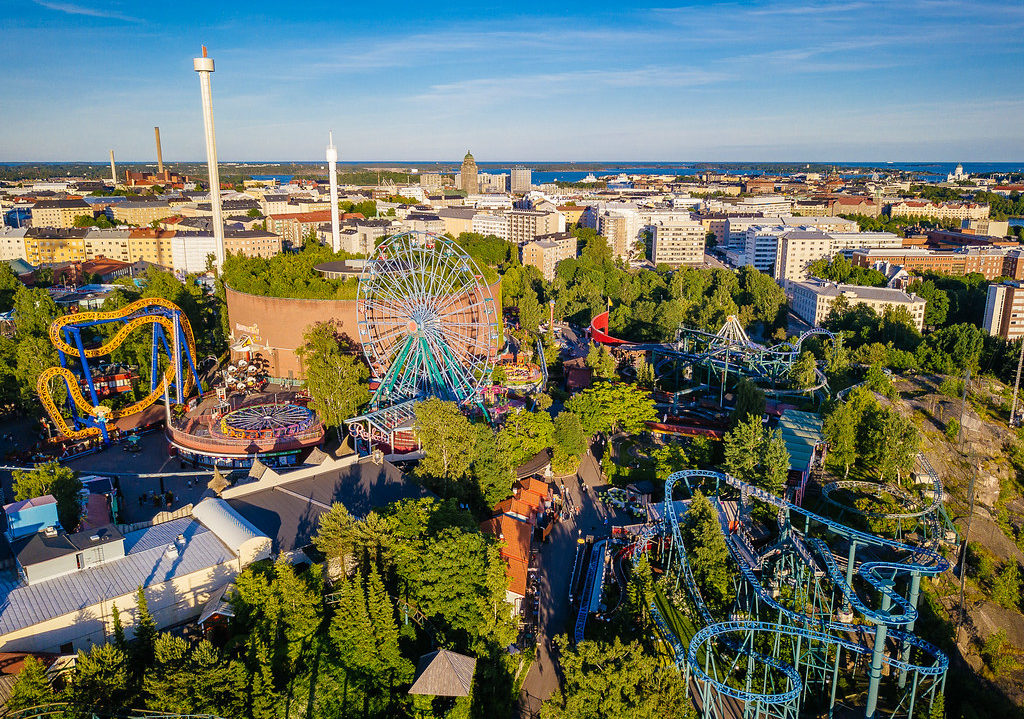 Linnanmäki is Finland’s oldest and most popular amusement park. It was opened to the public in 1950.

The amusement park has been owned and operated by the Children’s Day Foundation from the start which uses the park to raise funds for Finnish child welfare work.

The most popular attraction in the park is the old wooden rollercoaster, built in 1951.

It is possible to walk around the park free of charge but in order to go on the rides, you must purchase a ticket or time pass. (official website) 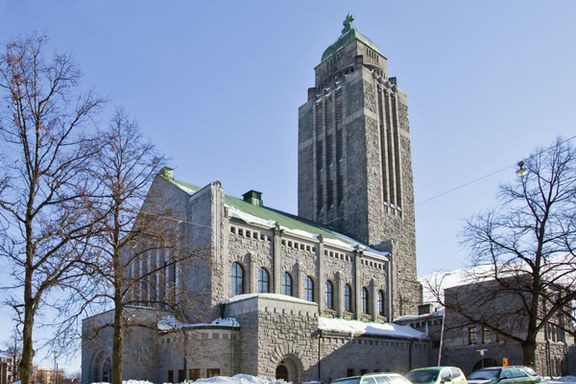 The Kallio district of Helsinki is a bohemian style suburb popular with students, alcoholics and drug users.

It is also the de facto red light district in the city with a plethora of massage parlors and strip clubs. Regardless of its shady image, the district is safe and interesting to visit.

The Kallio Lutheran church is a well-recognized landmark in Helsinki. It is situated on a hill making the 65 meter tower look higher than it actually is. Construction on the church was started in 1908 and was completed in 1912.

During World War II, there was an air surveillance station in the church tower. Until the 1970s was used as a trig point for land surveying. (official website) 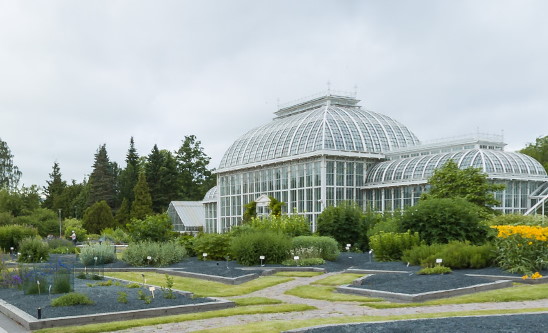 The gardens are also known as the Helsinki University Botanic gardens and are the oldest scientific plant collection in Finland. The Garden was founded in 1678 in Turku and moved to Helsinki in 1829.

The grounds are home to more than 2,800 plants of different origins.

The beautiful steel and glass greenhouse seen today is the centerpiece of the park and was completed in 1896. The building was damaged by bombing during the war and was restored in 1950. It further underwent modernization in the late 1990s.

The gardens are open all year round and there is an entrance fee to visit. (official website) 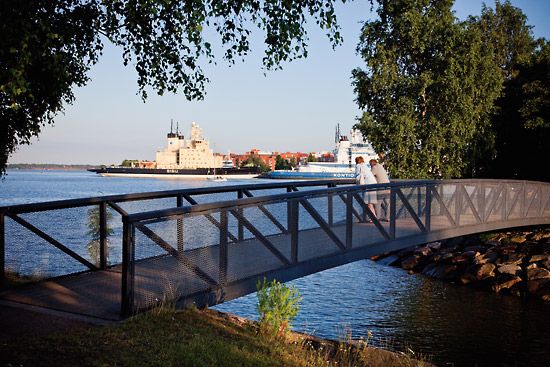 The name of the island in Finnish is “Tar Island” and it was used as early as 1805 for the purpose of storing tar which was used by Finns in shipbuilding, food production, and medicine.

In 1939 a road was built out to the island making access easier. In 1970 the island was landscaped and opened to the public.

There is a restaurant on the island which is dedicated to the history of the island and specializes in making tar flavored food.

From the southwest side of the island, there are nice views of the Finnish Ice breakers that keep the waterways open in the winter.