10 Most Beautiful Nature Areas in Finland 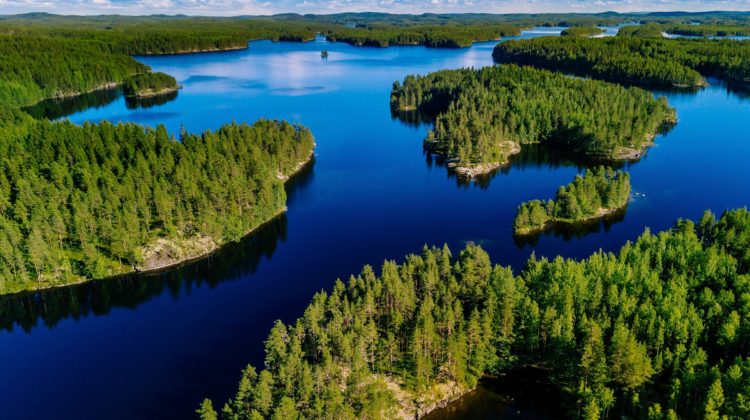 Having lived in Finland for almost 2 decades, I have been privileged to see the best that Finland has to offer. I have put together this list of 10 places which have the most beautiful nature and why you should visit them.

Finns call their country Suomi which roughly translates to “Swamp land”. I am guessing it’s their way to try to keep the place to themselves because they like their solitude. In Finland water usually tends to congregate into lakes (187,888 of them to be precise). Forests can sometimes be mushy early in the spring but they are usually dry enough to walk.

There is beautiful nature wherever you go in Finland but a very large amount of it is under private ownership. Fortunately, the government has established 40 National parks which are all very well maintained.

The best parts of Finland are the east side near the Russian border and the far northern regions approaching Norway. You can find real wilderness here, undisturbed by human impact. The Archipelagos off the west coast are also lovely, especially if you are into boating as most Finns are.

Enough talking, let’s get into the list. I have organized the places in order of recommendation.

1. Koli, a beautiful place to relax in Comfort

First place on the list goes to Koli National Park situated on the east side of central Finland just north of Joensuu. It is a very small National park but offers spectacular views over the eastern wilderness and gorgeous Lake Pielinen. The highest point of elevation in the park is 347 meters.

Koli is especially good for those who want to stay a bit closer to creature comforts as it has a lovely Spa resort (slightly dated but still nice enough) which is perfect for a couple’s retreat. My wife and I visited in the Autumn and it was spectacular.

If you plan to visit in the winter there is also a nearby ski slope nearby.

2. Road 62 to Savonlinna on the great Lake Saimaa

The Finns refer to Savonlinna as the Pearl of Finland and when you visit the region it is easy to see why. There are a lot of lovely roads that weave across island chains and along the shoreline of Finland’s largest lake, Saimaa (area of 4,400 km2). Of particular interest is the Scenic road 62 through Lietvesi which is a popular route also for cyclists.

This region is only 4 -5 hours drive from Helsinki so it is quite accessible to people visiting Finland. Not too far away is also the Linnansaari National Park and the beautiful Savonlinna with its fortress.

3. Kuusamo, the eastern Wilderness and doorway to Lapland

Kuusamo is situated on the eastern side of Finland, just below the Arctic circle. It is one of Finland’s best-kept secrets with spectacular wilderness. Of particular beauty is the Kitkajoki river (pictured above) that flows its way to the Russian White sea.

Kuusamo has it’s own airport and is also easily accessable by car train from the not too distant city of Kemijärvi if you don’t fancy the 10 hour drive from Helsinki.

Kilpisjärvi is at the most northwestern part of Finland and is a solid 15 – 18 hour drive from Helsinki. It has a very unique landscape not found anywhere else in the country due to its high base elevation (472 meters) and latitude (N69°). The mountains have been flattened substantially from the giant ice sheets said to have been up to 2 kilometers thick back in the last Glacial period.

Finland’s tallest mountain Halti is located close by with an elevation of 1365 meters (Well actually, the tallest part is on the Norwegian side of the border. The highest point on the Finnish side of the border is 1324 meters). The average elevation of Finland is only 164 meters. (Denmark 31 meters, Sweden 320 meters, Norway 460 meters)

This part of Finland is very remote and there is not a lot of infrastructure which is great for those who want to get away from it all. There are several nature reserves around including Mallan and Käsivarsi, and some marked walking trails.

5. Kittilä and surrounding area, the Adventure Mecca of Finland

Kittilä is 150 kilometers north of Rovaniemi and is the number one destination for skiing in Finland. It has the two largest ski resorts, Levi and Ylläs within a 50 kilometer radius. It is also very close to the Pallas-Yllästunturin National Park.

This place makes it onto the list not necessarily because if its unique landscape but more for the fact that there are always so many things to do here. Even in summer, there is an abundance of adventure activities including downhill mountain biking, ropes courses, and even horse riding.

Running beside the town is the Ounas river (Ounasjoki) which flows south through Rovaniemi where it joins up with the Kemi river (Kemijoki) which enters the Gulf of Bothnia on the north side of Kemi. The town also has a regional airport with regular connections to Helsinki.

6. Inari and the northeast tip of Finland

Inari in Lapland is one of my favorite parts of Finland because of the stillness and tranquility you can experience there. This north eastern part of the country is relatively flat compared to the more hilly westerns side.

During the summer months, the sun does not set, and often in the evening, you get to see gorgeous colors on the perfectly still water. The shoreline is also really pretty, coverer with rocky outcrops and small slow-growing spruce trees.

The northeastern border is defined by the path of the Karasjohka river. The village of Nuogram marks the most northeastern point of Finland. To the south of there are two lovely nature reserves and the famous Urho Kekkonen National Park and Lemmenjoki National Park.

Kavarken Archipelago is the only Natural World Heritage site in Finland. What is interesting about this area apart from its natural beauty is the fact that it is rising by 2 centimeters a year. This has been going on since the last of the permanent ice sheets melted around 10,000 years ago.

Today this area has an abundance of wetland bird life and other animal life.

Yyteri is a unique deposit of sand that has formed into sand dunes and forms Finland’s longest beach. This area is very popular with beach goers during the summer and at times it can be had to find a spot on the waters edge.

There are often very strong winds so the area is popular with Kite surfers.

Turku Archipelago consists of hundreds of small islands that stretch out some 70 km from Turku. 14 Island groups from this area make up the Archipelago National Park.

This Archipelago makes it onto the list because it is a wonderful example of archipelago nature and is easy to explore with a network of car ferries that connect the largest islands.

Nuuksio National Park makes it onto the list because it is a very good example of Finnish nature and is only a short bus ride (or drive) from downtown Helsinki. Despite its proximity to urban development, it has managed to keep its pristine nature.

This 4500-hectare park is surprisingly large. There are plenty of trails, places to BBQ, and clean lakes to swim in. The only criticism of Nuuksio that it tends to get a lot of visitors, especially when the weather is good.

Rovaniemi is lovely and definitely worth a look if you are heading through. There are a lot of fun activities to do there like Reindeer sled rides, visiting Santa, and all that stuff. I left it off the list as it is more often than not full of tourist buses and the nice nature you find there can also be found in other places on the list.

Kuopio and much of central Finland, including around lake Päijänne, are also worth a look. Much of the land there is privately owned but there are still a few smaller National parks scattered around.