The Most Beautiful Landscapes in Europe 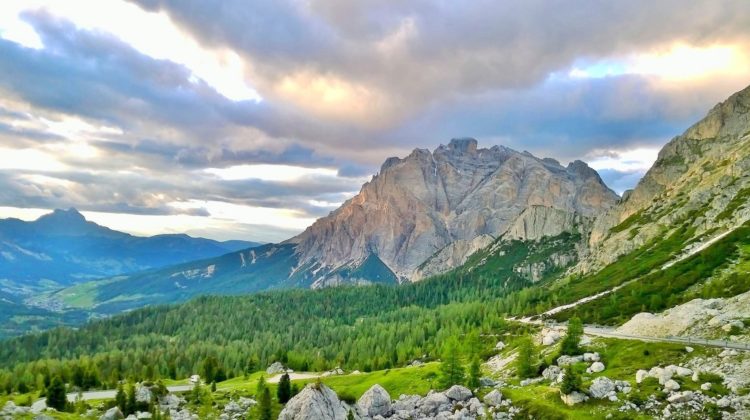 Here is a list of the most beautiful Landscapes that I have stumbled across while traveling around Europe. These places stood out in my mind for their uniqueness, splendor and natural charm. 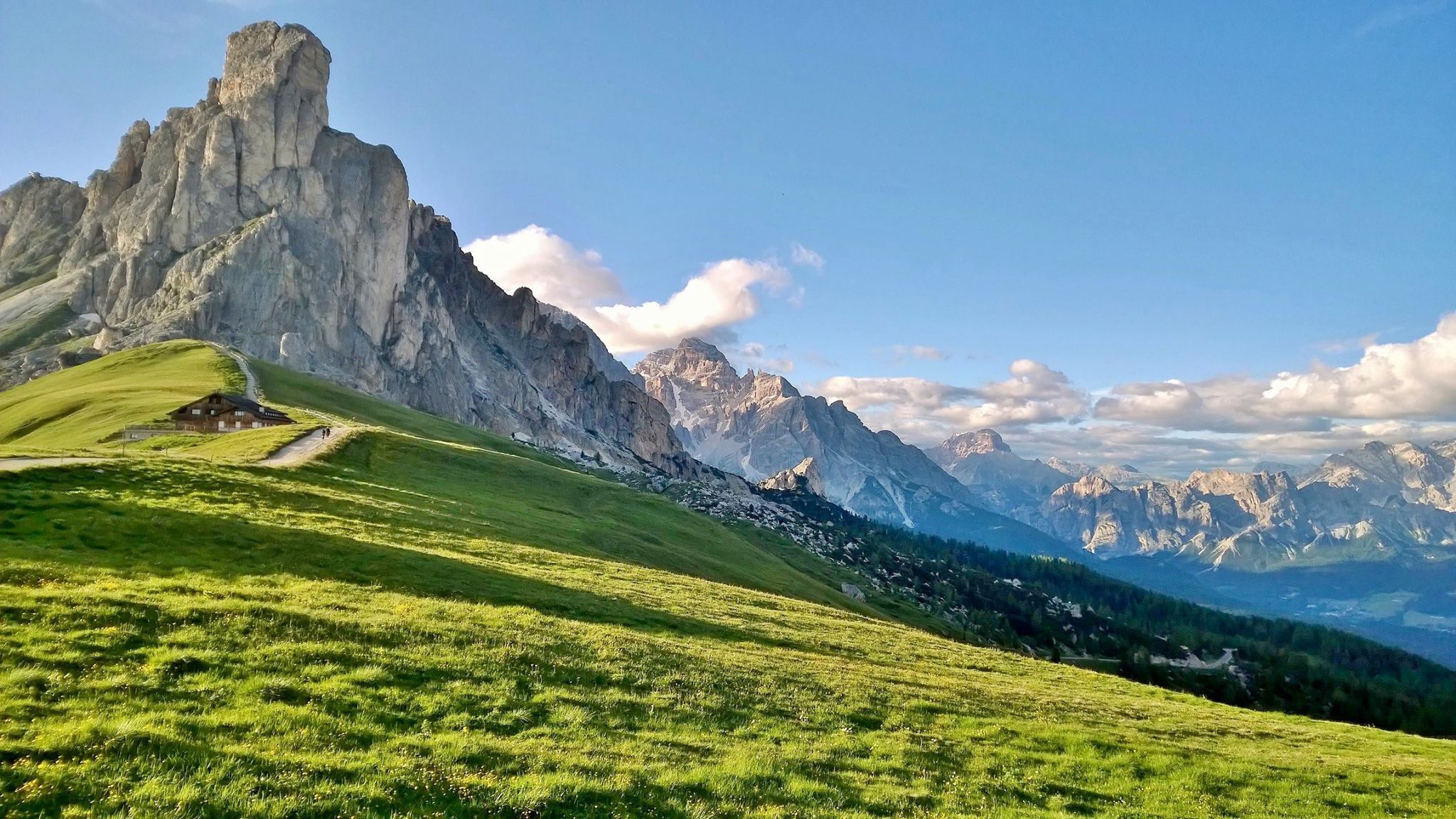 The Alps are beautiful wherever you go but the Italian Dolomites take it to a whole new level. The white dolostone rocks stick out like temples in the heavens. Cows and sheep graze on the lush grass and the crisp mountain fills your lungs.

Come sunset the sky comes alive with every hue of pink imaginable. There are so many activities to do like mountain bike riding, hiking and Via Ferratas.

My favorite time to visit is in May and June. The snow has usually melted sufficiently for the mountain passes to be open but there are very few people around. I took this particular picture in July.

This picture and the cover picture were taken at Passo de Giau. 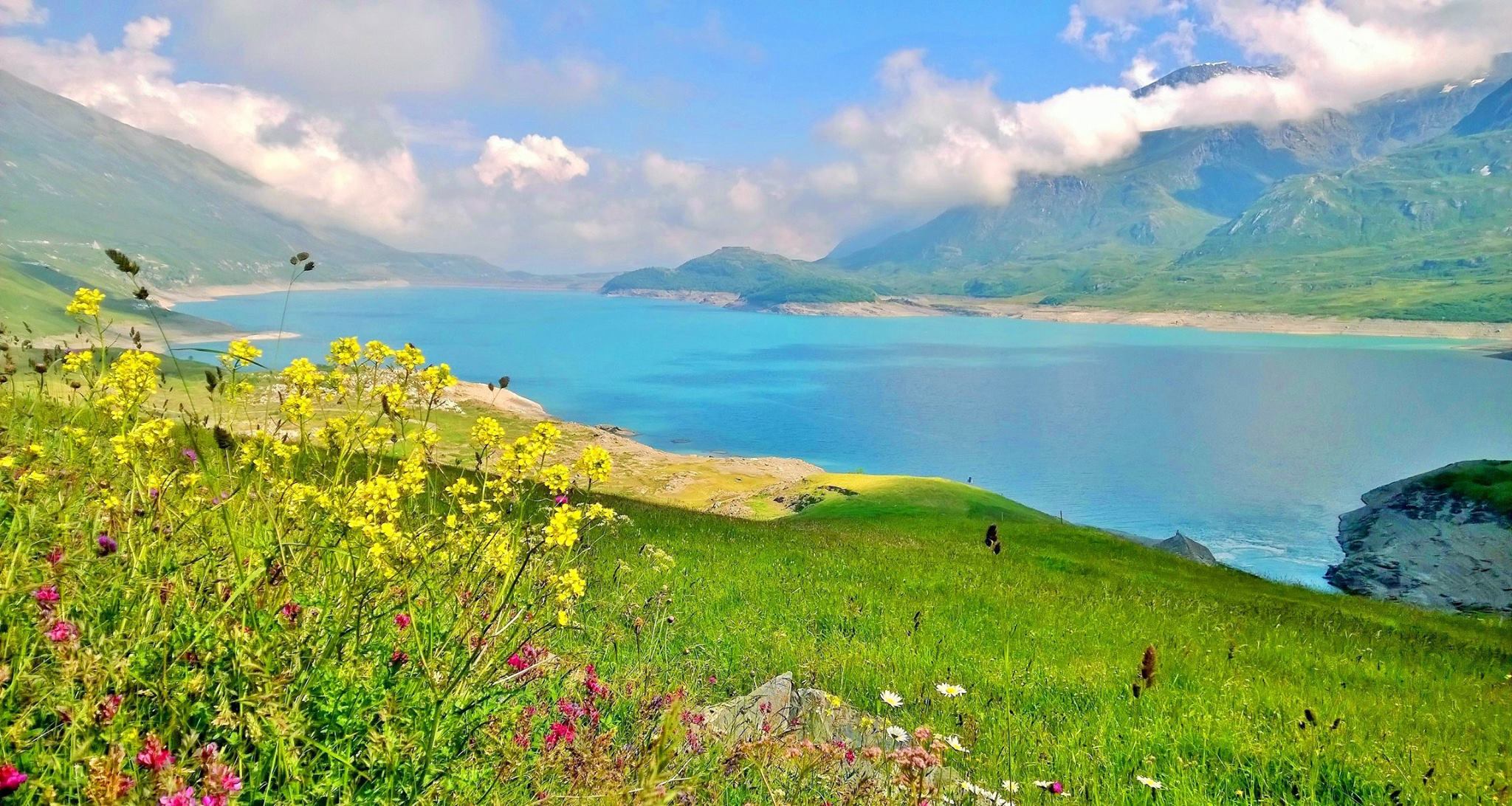 Spring and early summer in the French Alps are very scenic. For the most part its just you and the cows. The mountain roads weave their way up to alpine lakes and catchments. Wild flowers grow in the luscious meadows.

A good place to start the drive is from Nice, France and drive towards Geneva, Switzerland. On this road you will pass Cime de la Bonette which is the highest paved road in Europe.

This particular picture was taken from Lac du Mont Cenis. The lake is naturally that aqua blue color. 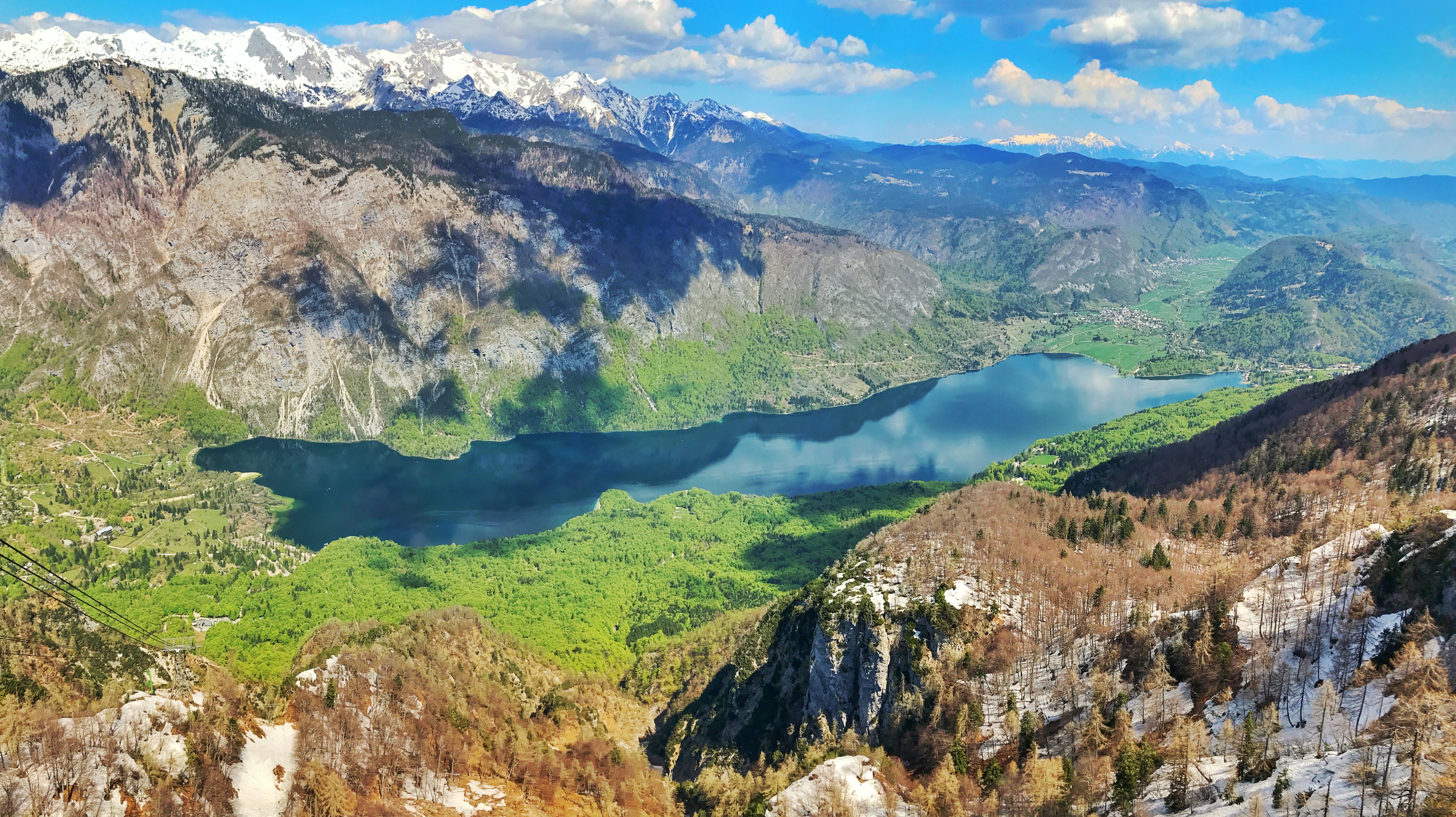 A bit over an hour’s drive from Slovenia’s capital, Ljubljana is Lake Bohinj. It’s crystal clear water flows in from the alpine mountains of the Triglavski national park.

There are some nice cafes at the east end of the lake. The west end is a bit of a ghost town with a mysterious hotel that has fallen into ruins. There is also a nice walk to a waterfall.

Half way along the lake is a ski lift that shoots up into the mountains to the Vogel ski center. From up there one can see a spectacular view of the lake and valley.

I discovered this town after riding down a muddy track over the mountain on one of my European Motorcycle trips. What struck me was how peaceful the place was. It was easy to enjoy the nature and tranquility of the place. 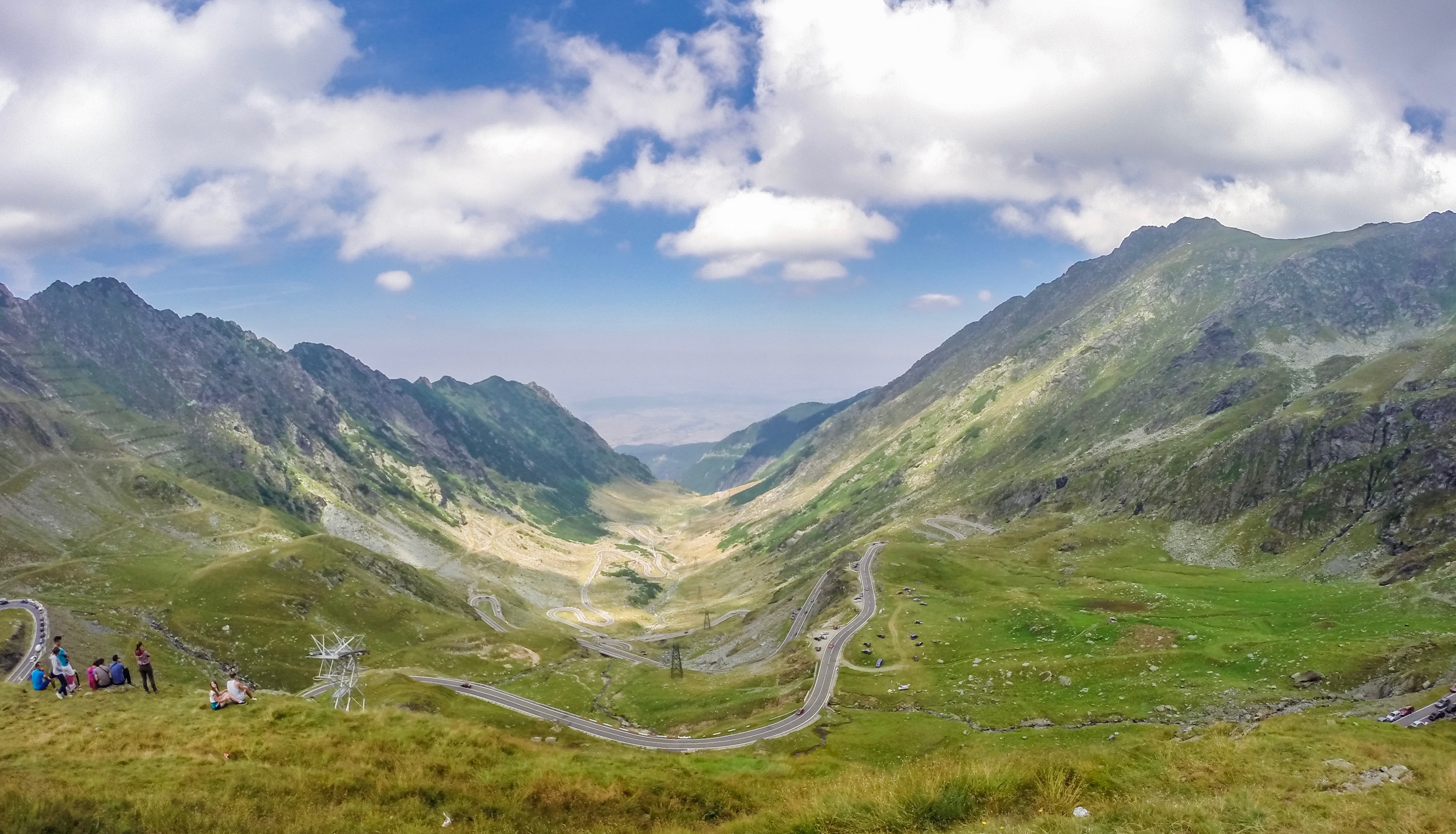 Probably the most scenic road in Europe, the Transfagarasan Highway winds its way us like a spiral staircase. The sheer length and continual elevation keep you wondering when it will end.

At the top is a little lake and a cafe for a much needed break. Once on the other side, a decent equally as long and scenic starts.

This mountain pass gets busy in the summer, especially when the weather is good. It’s worth trying to get an early start to beat the crowds.

As Greece’s tallest mountain reaching a height of 2,918 m, Mount Olympus is no small mountain. As you ascend it’s hard not to be captivated in the Greek Mythology encapsulating this special place.

I visited during the summer and rode my motorbike on off road farmer’s trails most of the way to a mountain refuge.

Half way up I got caught in a severe hail storm with nowhere to hide. It felt like fury and punishment from the gods for trying to conquer their mountain. I spent a restful night in an alpine refuge and reached the peak on foot the next day. 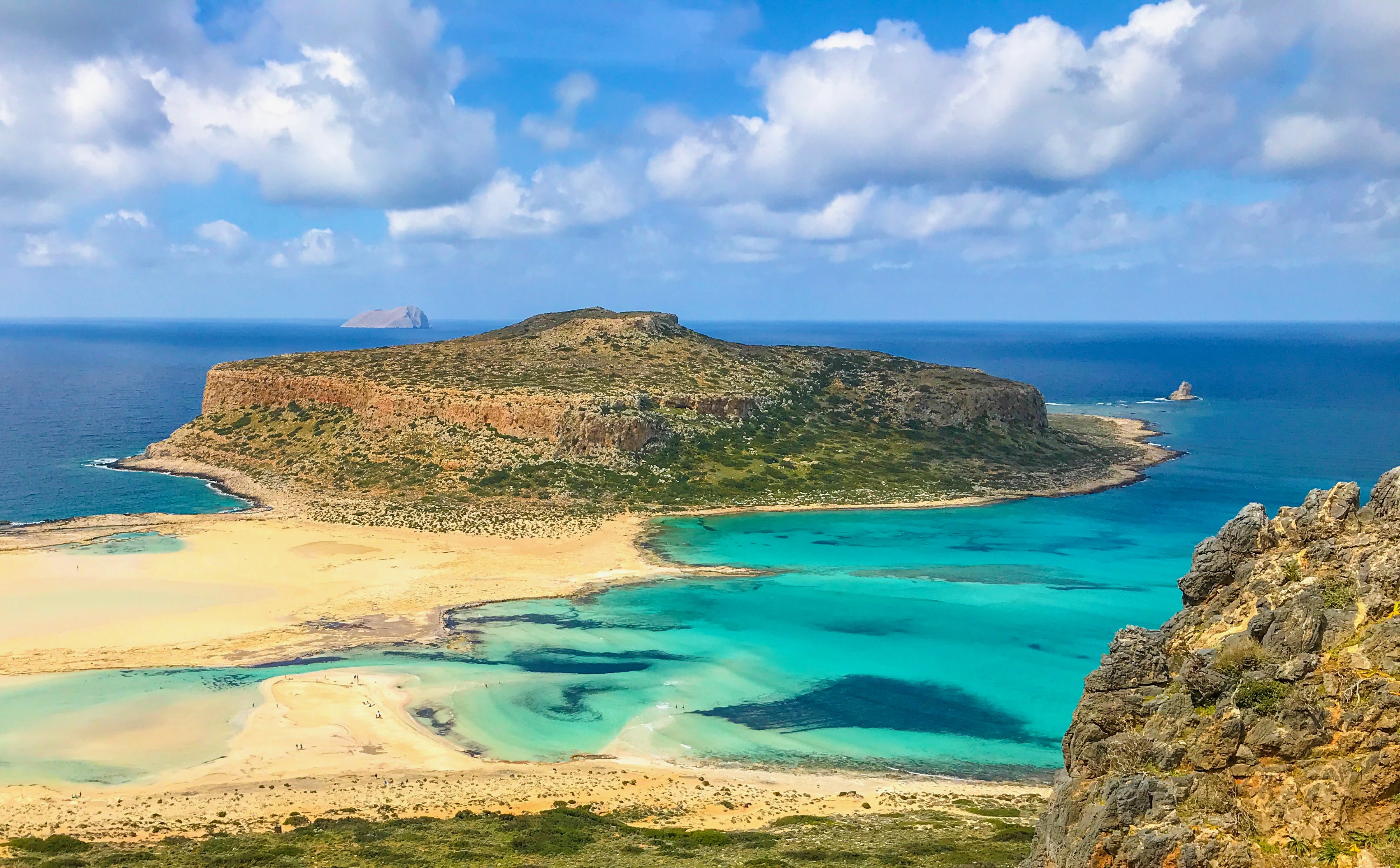 Crete is an unexpectedly awesome place. It has millennia of history, staggeringly high mountains and mind blowing seascapes.

The island is 260 km long and 56 km at its widest point. (Bigger than the 7 smallest countries in Europe combined) It has a population of over 600,000 people who are relaxed and friendly.

There are a lot of activities available and things to do. I especially just enjoyed driving around in the mountains and chilling at the beach. 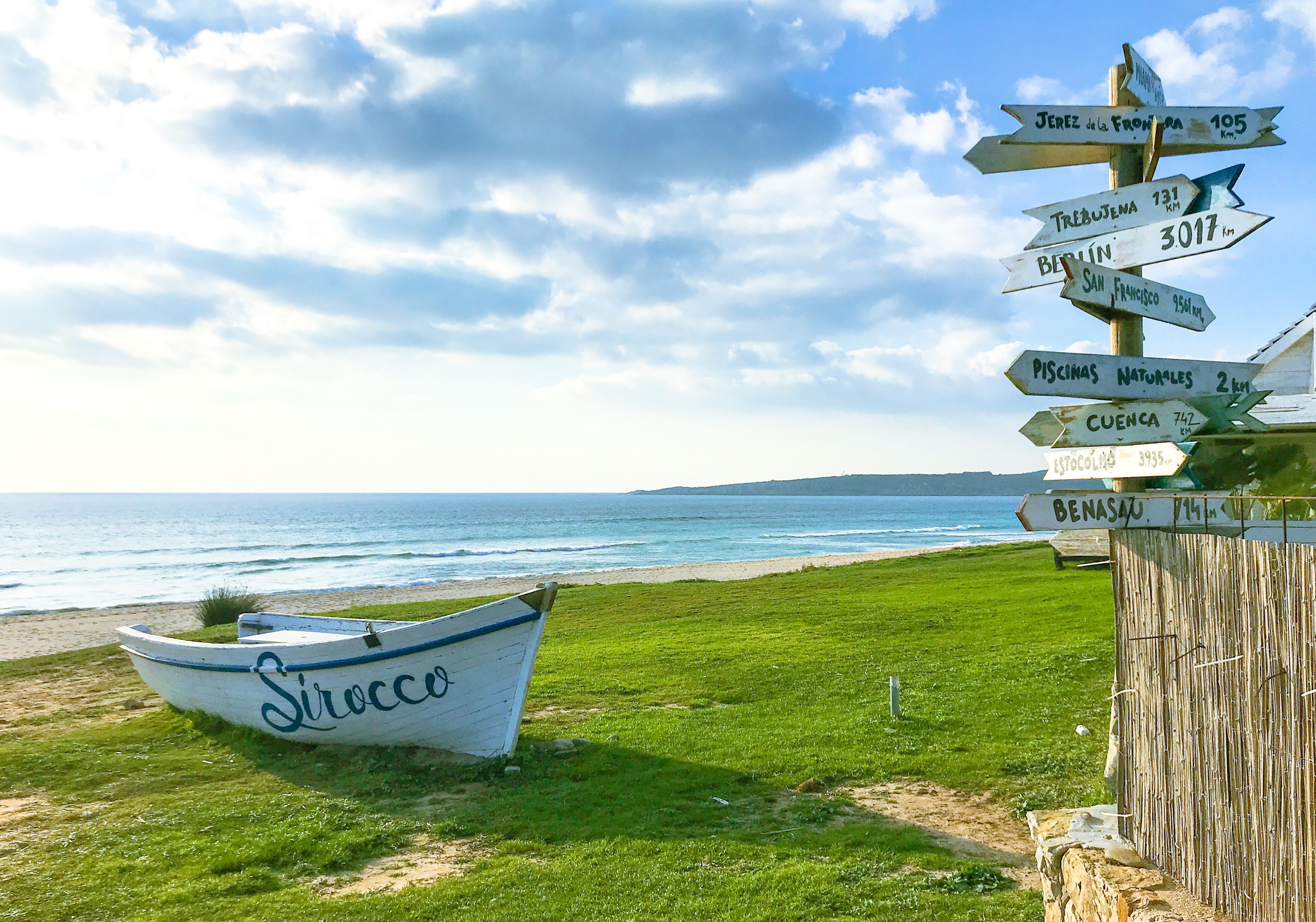 Located in the south of Spain, 23 km from Tarifa is the sleepy beach town of Bolonia. It is surrounded by picturesque green  hills with protruding rock formations. At the far west end of the beach are sand dunes.

There are more cows than people here which is rare for Spain. This beach has yellow sand unlike many of the dull and ugly grey beaches found along Spain’s east coast. Like much of the Atlantic coast it is more green and lush thanks to the higher rainfall.

If you like history you will find some of the best preserved Roman remains from the town of Baelo Claudia dating back some 2000 years.

I personally fell in love with the place for it’s remoteness and rugged beauty. It also reminded me of the beaches back home on the south coast of New South Wales, Australia. You can even find some Eucalyptus trees if you look around. 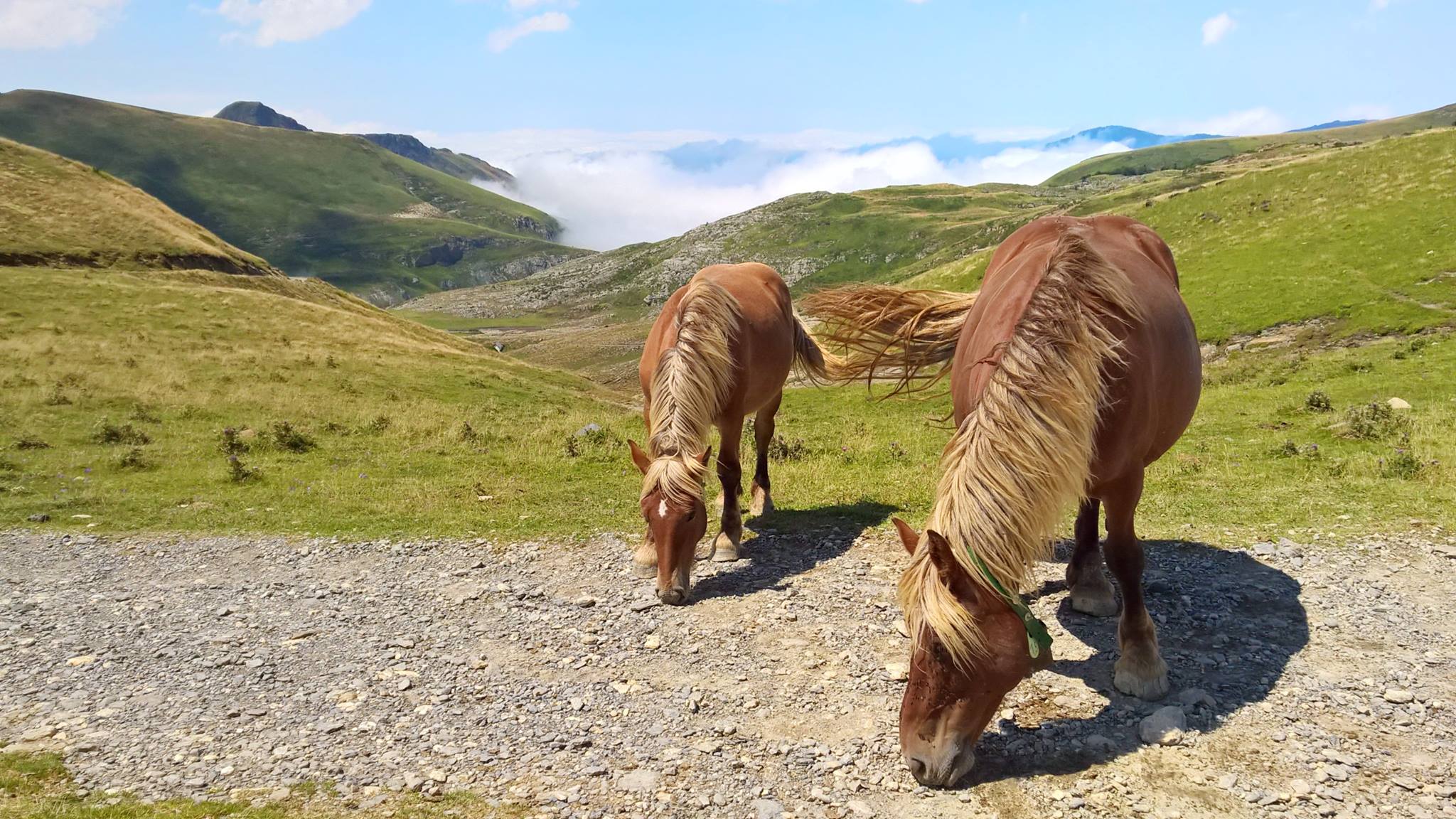 Starting from San Sebastian, all the way to Barcelona, mountain roads zigzag back and forth between France and Spain.

The weather here is unique – On the Spanish side it is hot and dry while on the French side it is wet and cloudy. With this weather difference comes dramatically different landscape.

The roads are exciting with steep descents and climbs, tunnels and cliff edges falling hundreds of meters. You are also never far from good food both on the French and Spanish side. 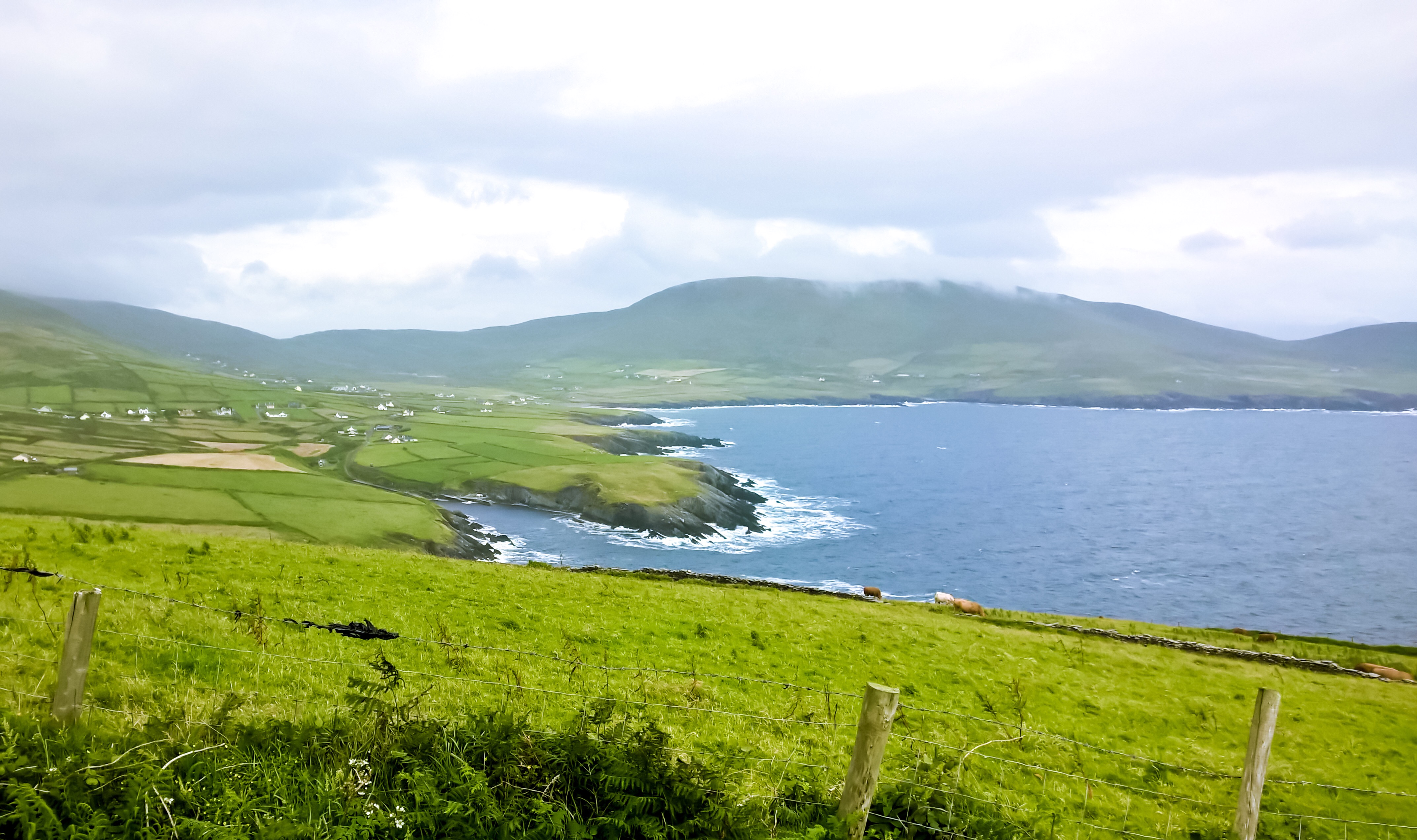 Tucked away in the south west corner of Ireland is a small and twisty ring road known as the Ring of Kerry. It is the crown jewel of Ireland.

Small roads cut through small towns along the windswept coast. The black rocks look stunning as the rough sea continuously pounds it, leaving a wake of white water.

My only wish would be that the coastline would be more accessible. Most of the land is privately owned and visitors are not welcomed to take a closer look. 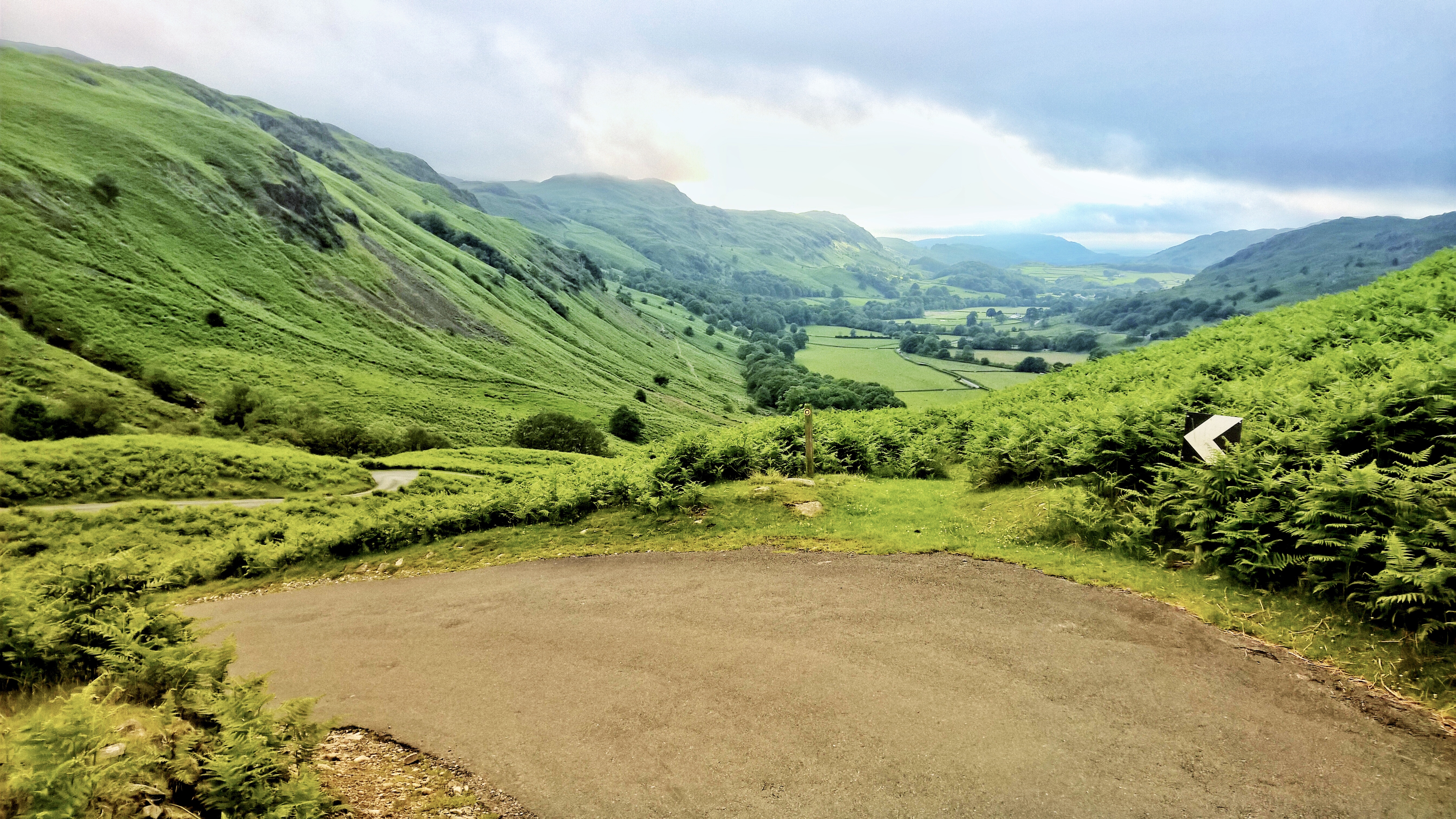 The Rolling green hills and open fields of the Lake District are iconic of what we associate with England.

This remote wilderness and farmland has been settled over the centuries by Celts, Romans, Angles, and Vikings. Today there are scattered archaeological remnants  within the bounds of this national park.

Similar and just as scenic is Snowdonia National Park in Wales (120 km SW). It should worth a mention on this list. 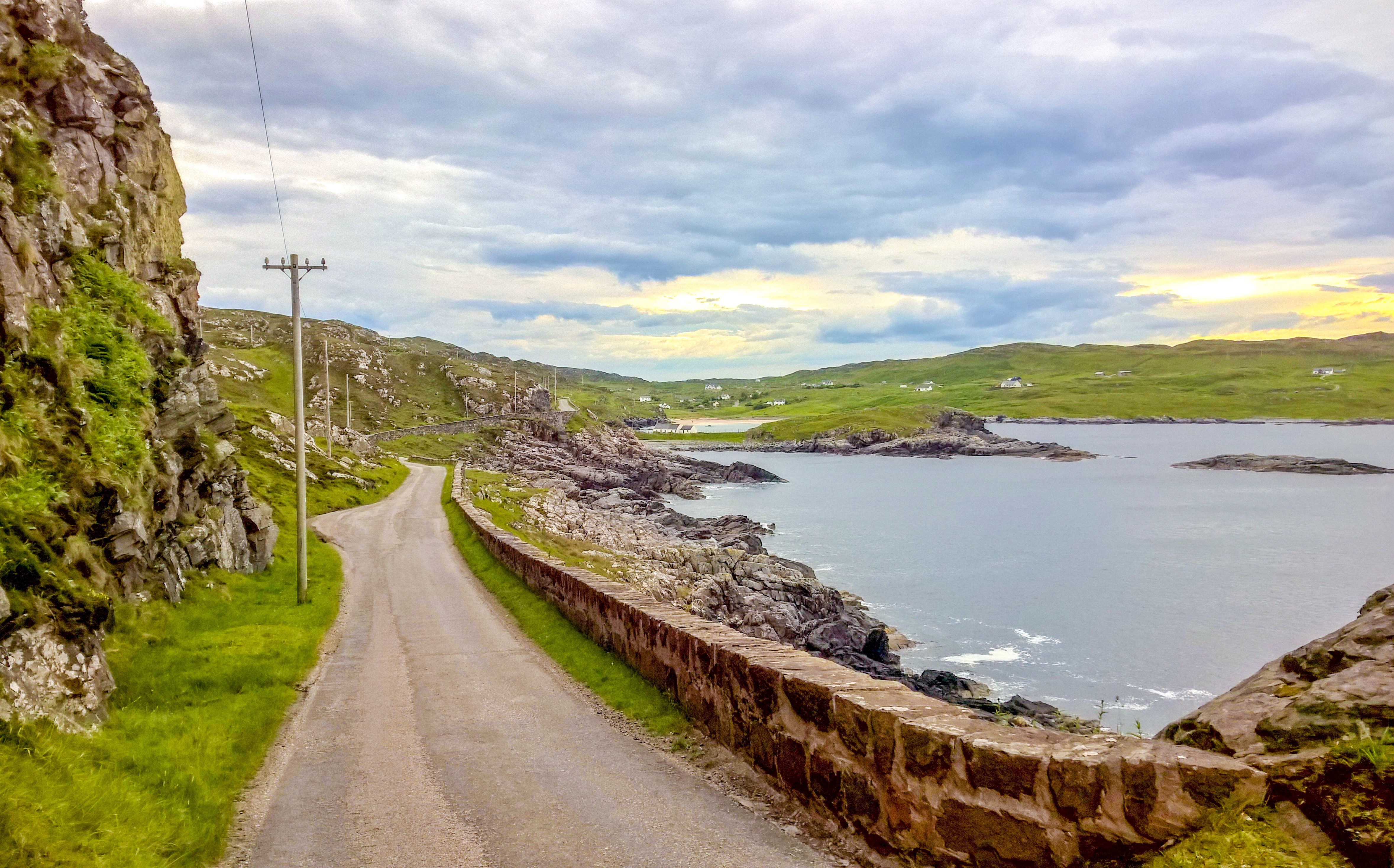 The North west Highlands of Scotland share a lot of similarity with the rugged Atlantic Coastline of Norway. Erosion has exposed beautiful rock formations.

The narrow lanes that cut down the west coast are tight and twisty.  With so much scenery smacking you from every direction it was hard not to miss a corner.

Sheep are the animal of choice here. They usually sit quietly on the side of the road and watch you go by. Occasionally there is also a Scottish cow. They do not have as good road manners and you may need to carefully go around them without getting hooked by those big horns.

I started in Durness in the north and hugged the coast as best I could all the way down past Ullapool through to Isle of Sky. This particular picture was taken at Clashnessie Bay.

Flåm and the Norwegian Fjords, Norway 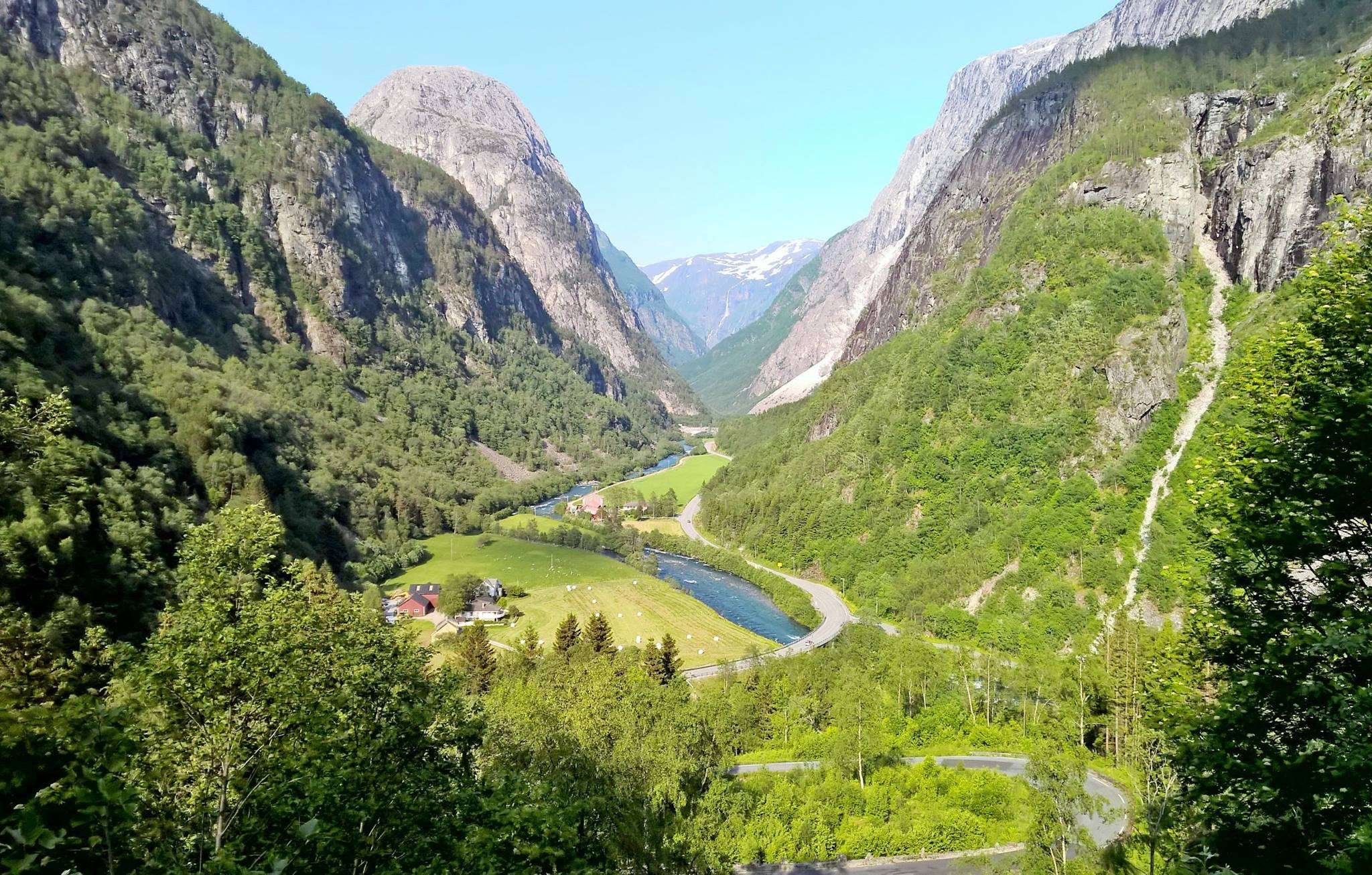 The Fjords of Norway have got to be in the top landscapes of the world. Their sheer size and depth can only be fully appreciated after experiencing it. Flåm is at the south east end of two UNESCO world heritage listed Fjords (Nærøyfjord, Aurlandsfjord).

This picture shows the river that runs through Flåm into the fjord. This steep serpentine road with a gradient of 18% winds down into the base of the fjord. A massive waterfall roars off the the left hand side. 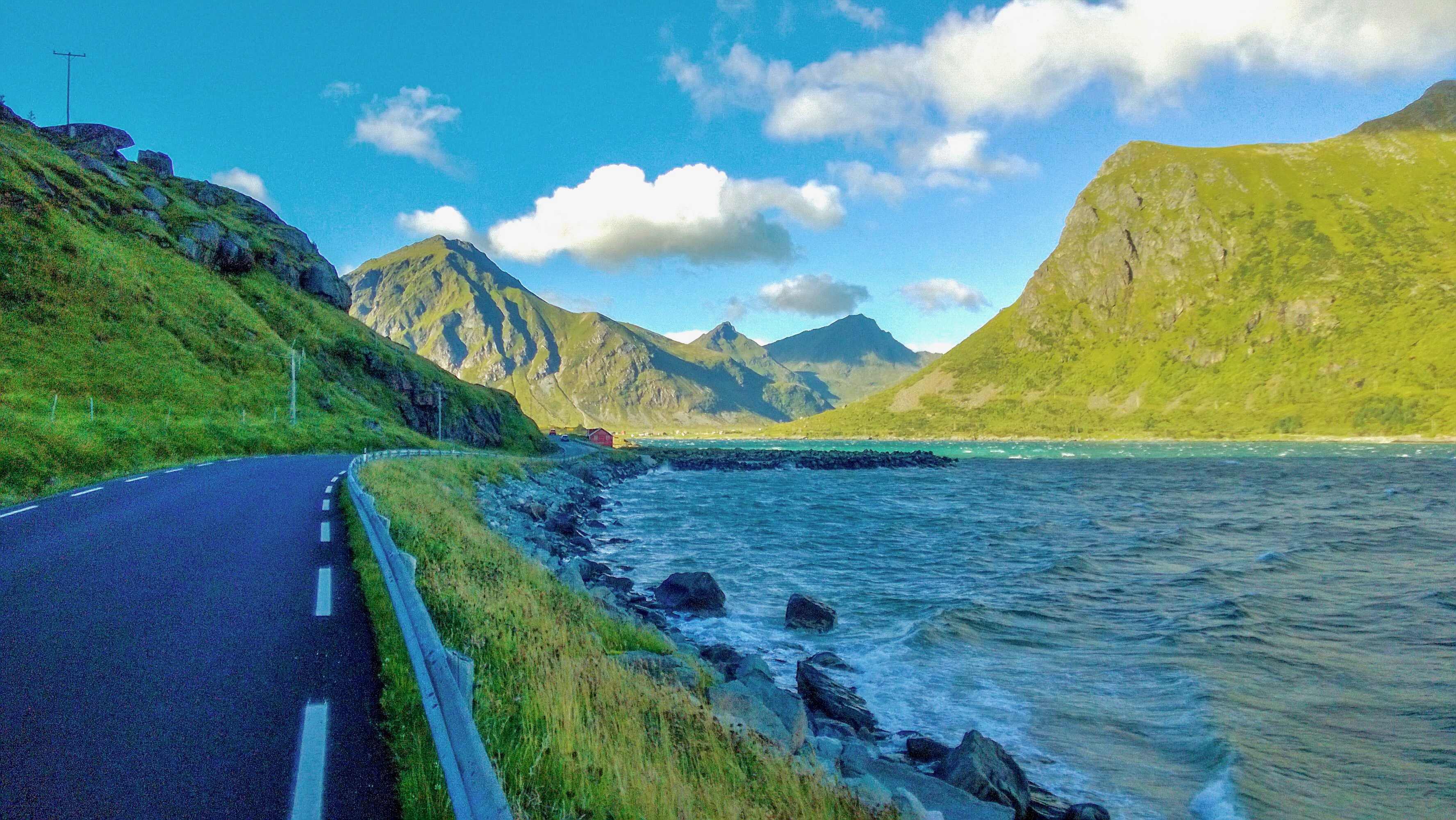 Located in northern Norway, this archipelago has a mix of farmland, beaches and towering mountains. A windy road links each of the islands.

At the end of the road is a village called Å and a ferry back to the mainland (Bodo). It’s remoteness and rugged beauty earn it a place on this list.

The weather off the Atlantic can be unpredictable and intense. When I visited there was a wind so strong it took considerable effort to stay upright on my motorbike. 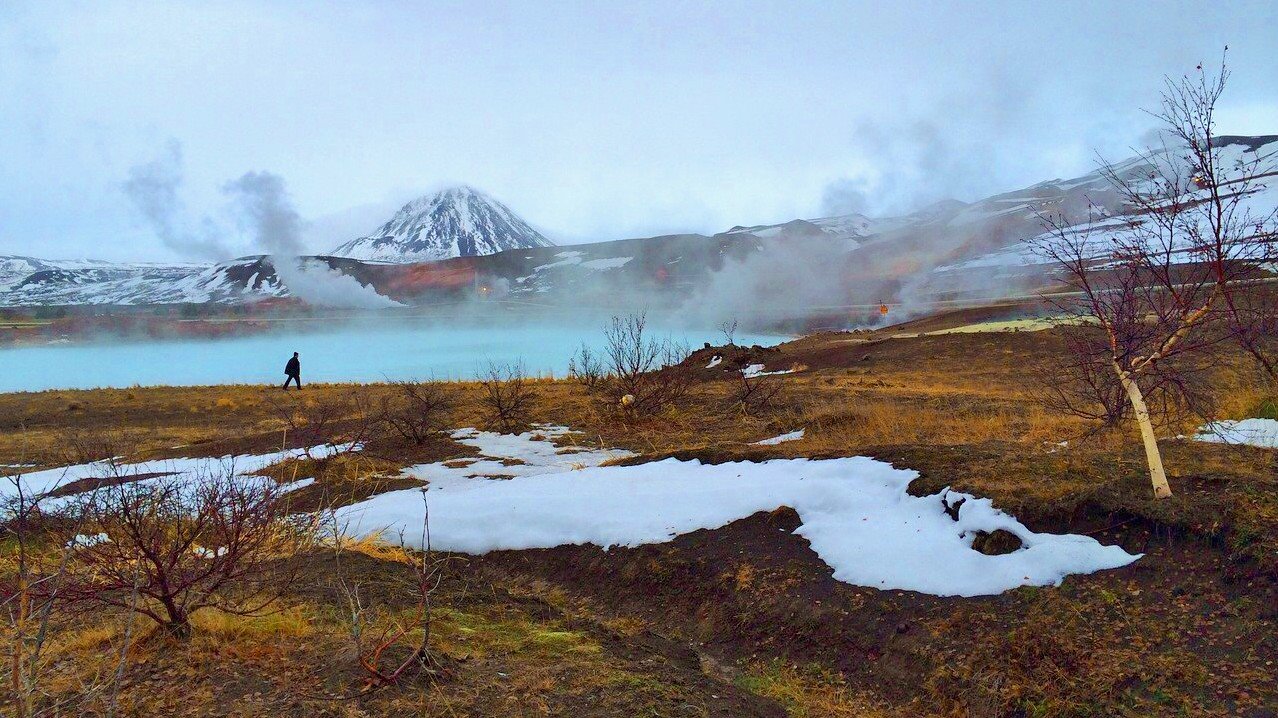 Visiting the volcanic fields of Iceland is like visiting another planet. Every corner has something different and unique.

From picturesque grasslands to steaming geothermal pools to baron extinct lava fields, Iceland has it all.

The plans  are to visit some new countries in the coming year: Georgia, Ukraine, Croatia, Albania, Israel, Cyprus, Kosovo and Moldova. If I see something gobsmackingly gorgeous I will add it to this list.