A Short List of Places to Live in Australia 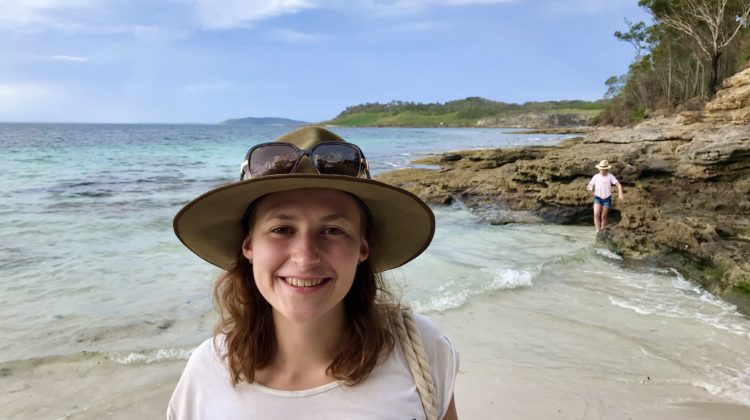 After living for 15 years in the Nordics, I am done with cold weather and short days. Finland has been good to me but I want to enjoy my home of Australia – the smell of eucalyptus, the sound of the waves crashing on the beach, and the feeling of the hot baking sun scorching my neck.

The idea of living in a small country town, close to nature appeals to me. There should be mountains close by, the beach within 30 minutes, and an airport so I can fly aircraft. Below are some great places that tick all these boxes.

Just 90 minutes south of Brisbane is the iconic Gold Coast. Leave the mess of Skyscrapers, and crowds of Surfers’ Paradise and head south until you come across Currumbin. From there all the way as far as Evans Heads are beautiful beaches and spectacular mountains – Lamington National Park, The Border Ranges,  Mount Warning, all incredible.

There are three very pretty inlets along the coast; Tallebudgera Creek and Currumbin Creek and the Tweed river. The water is calm and aqua blue. These tidal rivers are especially good for fishing. 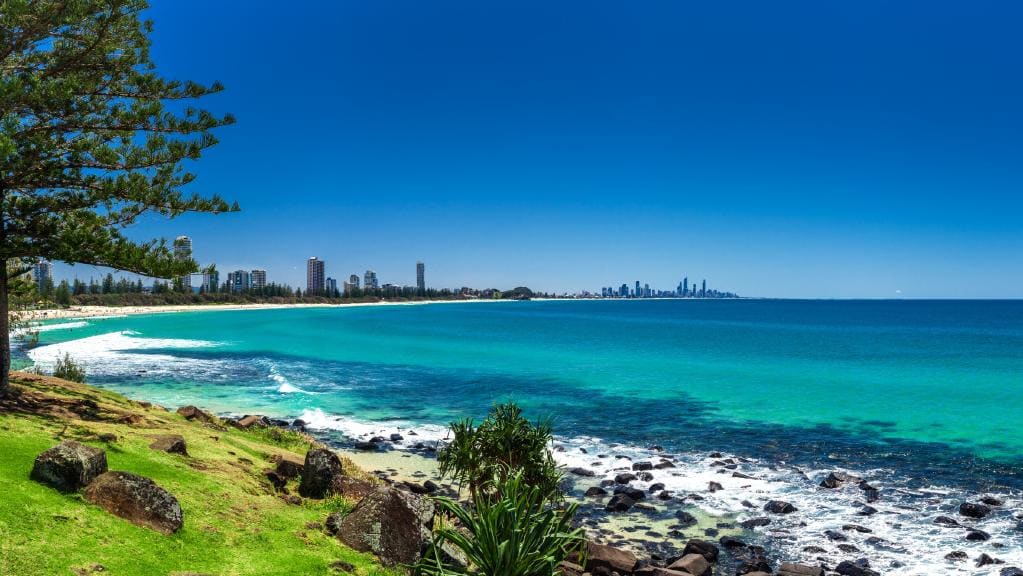 From the Gold Coast airport, there are direct flights to major east coast cities including Sydney and Canberra.

There are plenty of rural 5 acre properties with paddocks for horses tucked up just behind the coast (Tallebudgera, Currumbin valley, Mudgeeraba) but property prices are high compared to places a bit further out.

Living on the Queensland side of the border is definitely cheaper (e.g. food, petrol, rates, car registration) but Norther New South Wales also has some spectacular towns well worth considering.

Daytime temperatures usually stay around 30°C in the summer and 20°C in the winter. Evening temperatures drop usually by 10°C. Enjoy on average 300 sunny days per year.

The Gold Coast is my wife Tania’s favorite option. It definitely is a stunning area. I have lived there before with my parents and also went to university there so know the area well.

Located 75 minutes north of Brisbane, the Sunshine Coast has a similar climate to the Gold Coast, but is quieter and less built up.

There are plenty of nice beaches both north and south of the epicentre of Maroochydore. The further north you go the less built up and crowded the beaches are. Noosa has a spectacular beach right next to a small national park.

The Sunshine Coast airport sits just to the north, close to the ocean. It has good connections also to all the major cities. There is also an airport south in Caloundra an one north at Noosa. 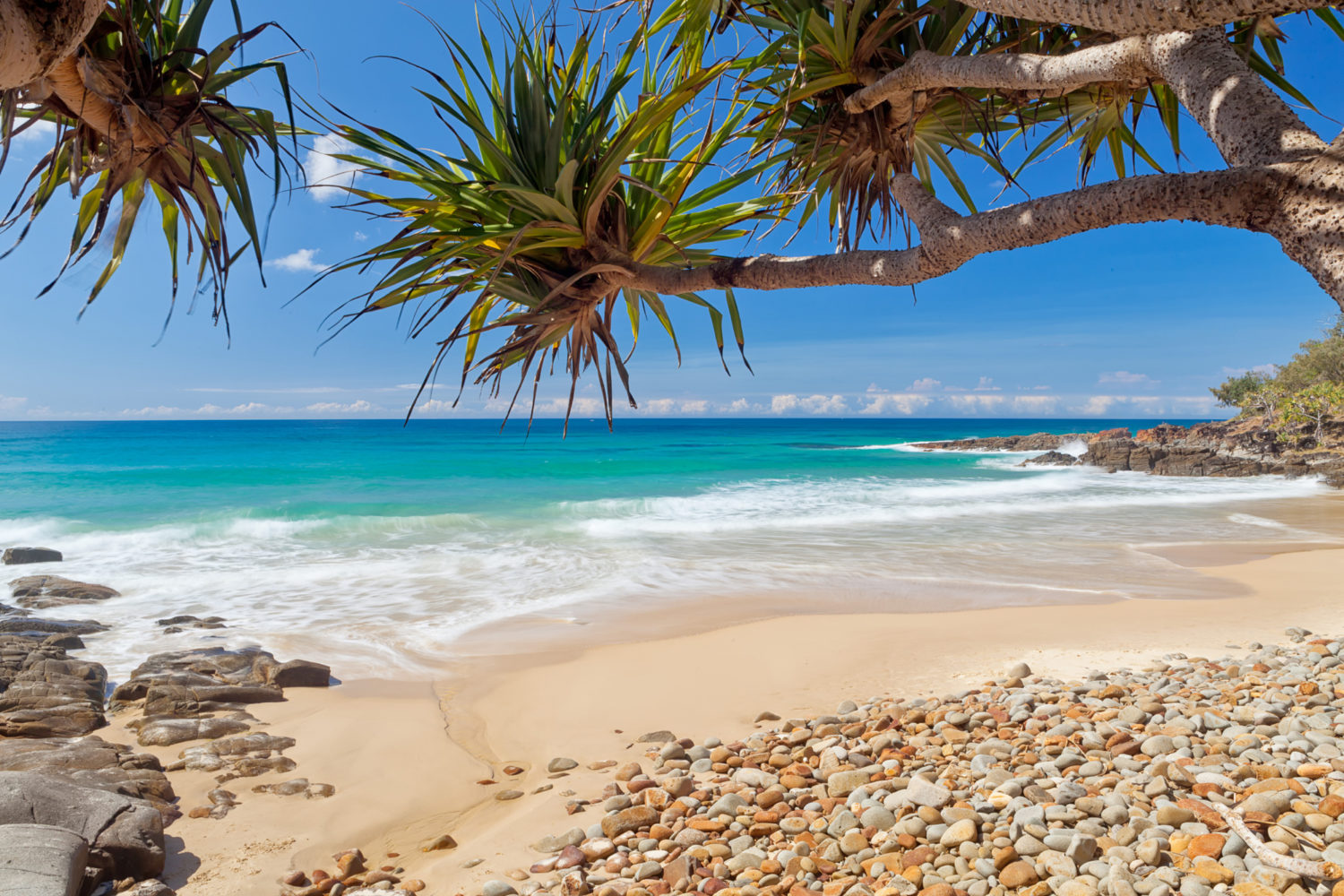 Other beautiful places include the Hinterlands around Maleny overlooking the Glasshouse mountains, the furtle and green farming land of Gympie to the north east and the Great Sandy National park below Fraser Island.

I personally would like to spend more time exploring this area so it tops my personal list of places to live.

If you want good surf beaches Jervis Bay isn’t the place to come, but its white sand beaches are arguably some of the prettiest in Australia.  These calm waters of the bay attract Humpback whales and other marine animals looking for a place to chill.

Jervis bay has a large Naval base at the south end which belongs to the Australian Capital Territory. Canberra is situated inland to the west some 147 km away (as the bird flies).

There are two very nice airports (HMAS Albatross airport and Nowra) but they are both used for Military purposes. There is grass stip called Jaspers Brush North of Nowra. 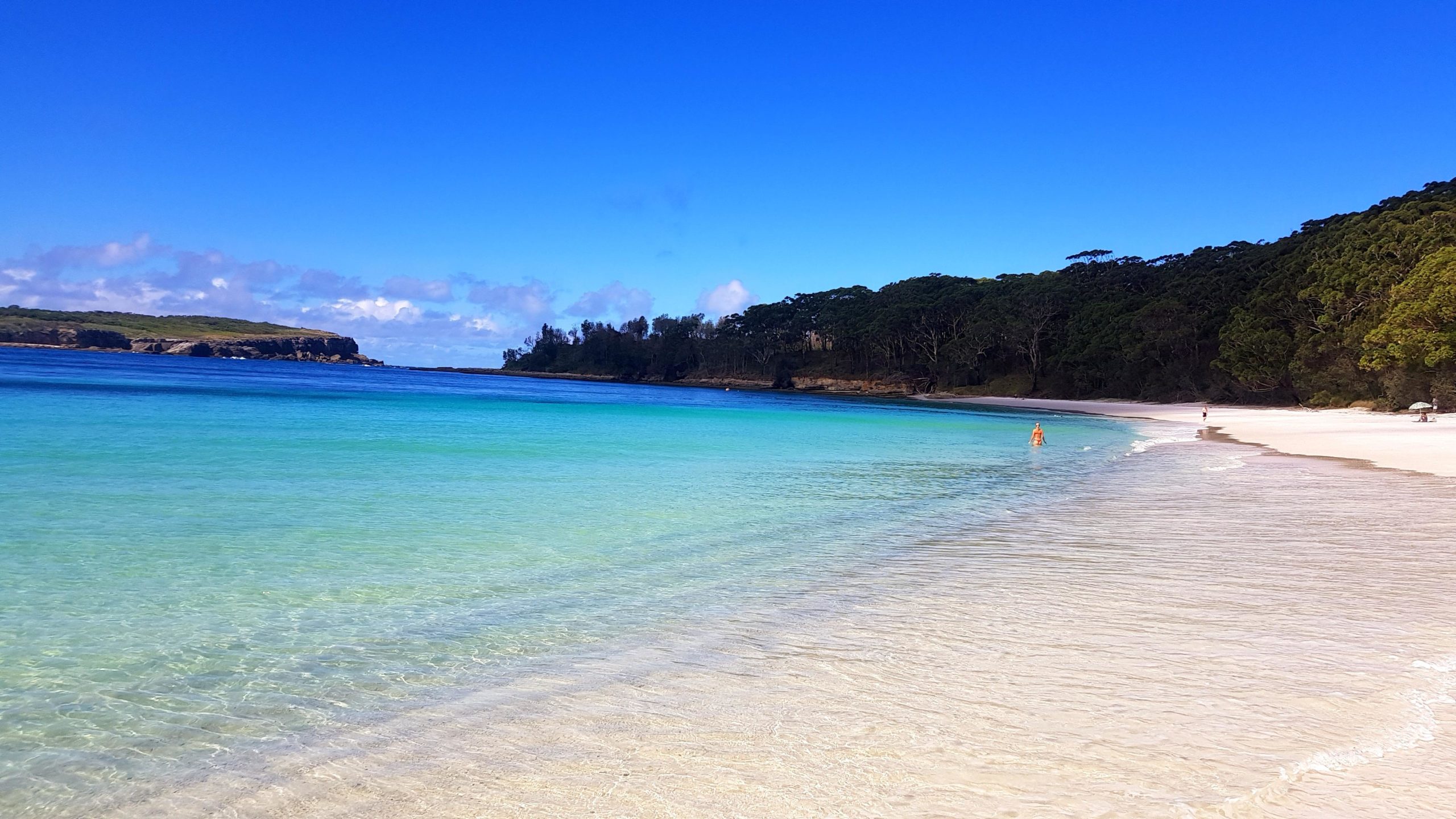 The prettiest part of the bay can be found in the Boorderee National Park, right next door to the military base. Just north of there is Hyams Beach which holds the record for the whitest sand in the world and hence gets a lot of tourists flooding in to take selfies.

Our favorite little suburb is Huskisson around the middle of the bay. It has a pretty tidal creek, great beaches and good amenities.

We like the that Jervis Bay is close to Canberra and Sydney where our family live but summer daytime temperatures only average 23°C and winter temperature fluctuate between 15°C and 7°C so it can get cold. Also it is very much a tourist town so it gets packed on the weekends and school holidays.

The Sapphire Coast starts at the Victorian border and goes north to the town of Bermagui.

What we like about this area is that it is far enough away from both Sydney and Melbourne to get too many tourists. Canberra can still be reached in a few hours.

The surrounding community survive on farming, light industry and retirees. The main airport is Merimbula and there are also several bush strips around. Moruya airport is further north of the Sapphire Coast, below Batemans Bay. 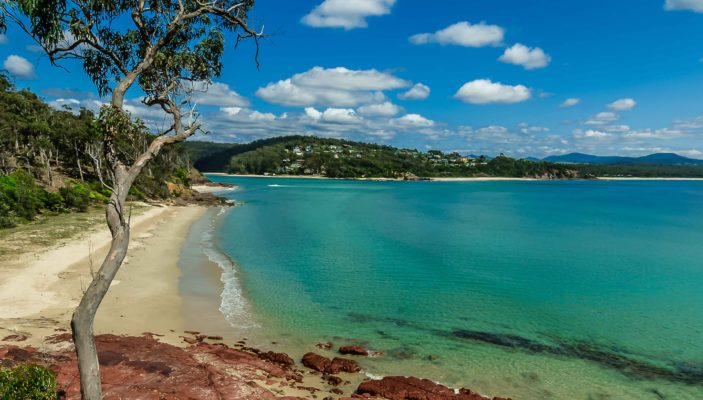 The prettiest town on the Sapphire Coast is Pambula. It sits above the Ben Boyd National park and has the Merimbula airport within 3 km drive.

The Mid North Coast of New South Wales comes in at 5th place not because it isn’t beautiful but more because of its remoteness. From Port Macquarie it is a 4 hour drive south to Sydney and a 6 hour drive north to Brisbane.

Despite its remoteness I can’t help being curious what it would be like to live far away from the big capital cities. I am probably not alone; Port Macquarie and Coffs Harbour have both been growing and now have populations of 45K and 75K respectively. 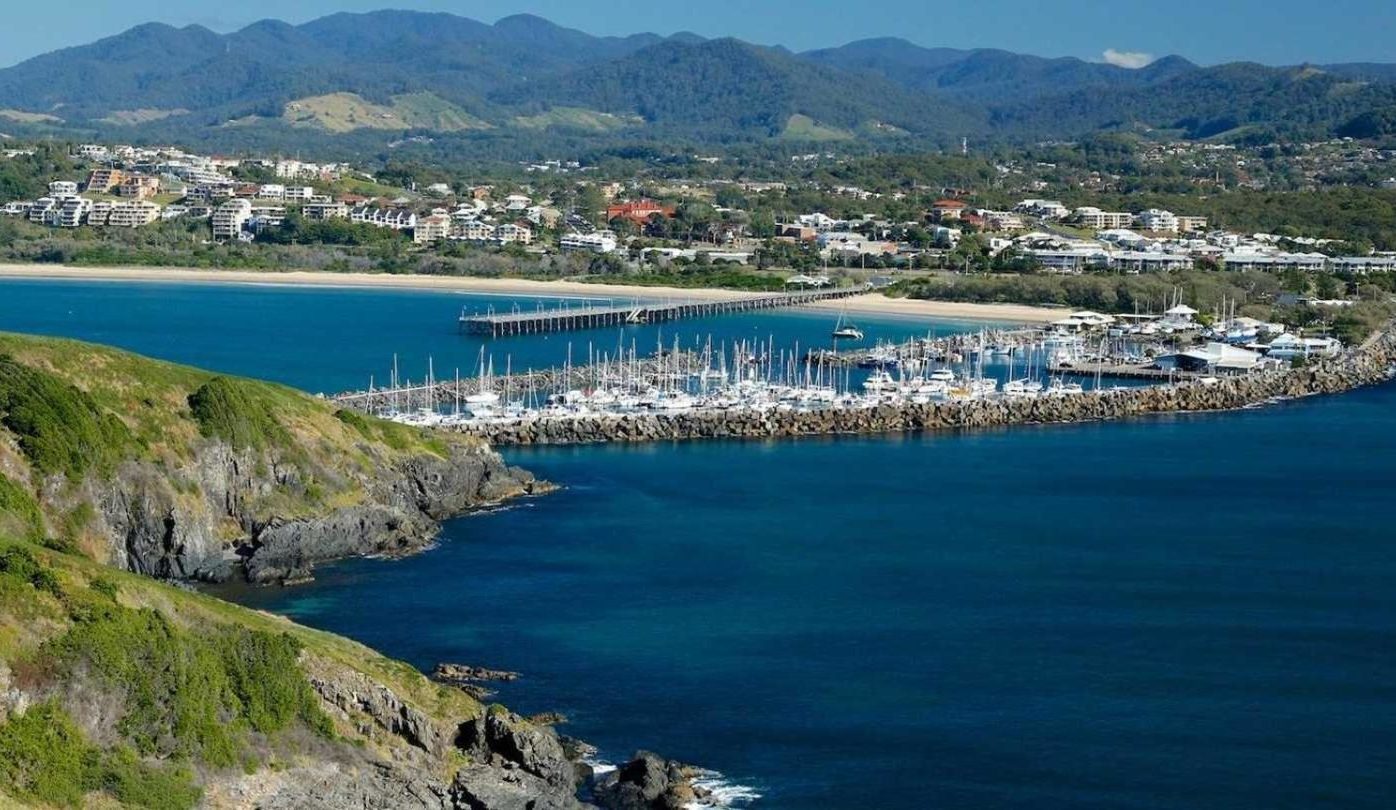 There are nice enough beaches and some very beautiful mountains behind the coast, protected within several national parks. Also one of Australia’s most famous motorcycle roads, the Oxley Highway, starts at Port Macquarie.

Temperatures average 25°C in the summer and 15°C in the winter. There is more humidity than what you experience south of Sydney.

Other Places of Interest

Some notable places in Queensland that did not make it onto the list because I haven’t visited them include Hervey Bay, Gladstone, Mission Beach, Airlie Beach and Hinchinbrook Island. I expect while these places are stunningly beautiful they would mostly be geared up towards tourists.

We plan to explore them on our next trip to Australia. 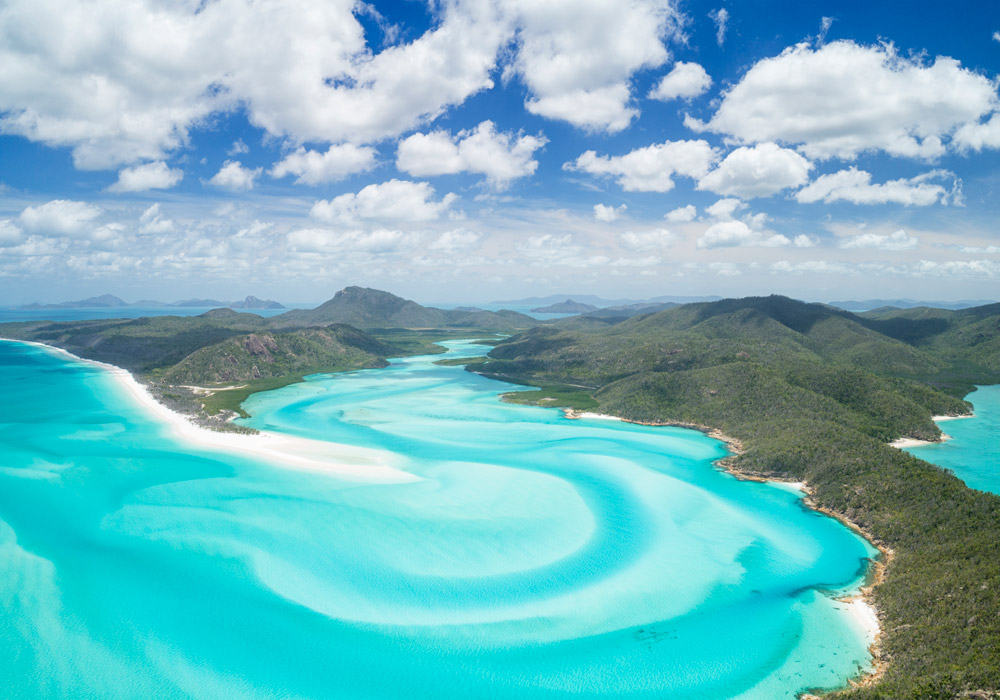 We would also like to explore Port Douglas and further north. The humidity, rainfall and wildlife might be a hard sell to my wife Tania.