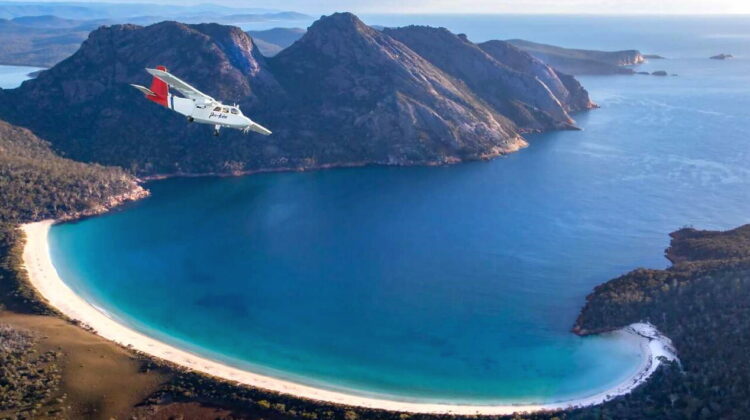 Tasmania is a gorgeous part of Australia and for us Aviation enthusiasts there are a bunch of spectacular airports that link up the island. What makes these airports so lovely is the surrounding nature.

The east coast of Tasmania has lovely beaches, the west coast has the wilderness and the north coast and central belt have the pretty farmland. We will also take a look at airports on King Island and Flinders Island in the Bass Strait.

The airports on the list are in no particular order. You can click on the titles to navigate straight to the airport in google maps to take a look for yourself.

Queenstown Airport is located on the west coast of Tasmania at a height of 866 ft. It is built on a plateau above Queenstown. The area was mined for copper and gold starting in the 1890s. At one point it was the third largest town in Tasmania but now it has a modest 1800 residents.

Queenstown Airport has a paved airstrip with a 763 m long threshold. There is an oddly long additional 610 m of extended threshold.

From the east side, the terrain is gradual but on the west side, Mt Owen presents a 3608 ft wall. Turning right after take-off there is a 6 km long valley that provides adequate distance for a climb out.

The airport is run by West Coast Council. They require you to contact the council to get permission to land. They have a minimum landing fee of $26 or $15 per tonne paid via Avdata.

The moonlike hills around Queenstown are unique. They were logged and then further inadvertently poisoned by sulphur from mining activity. Enjoy a nice walk down to the local town or surrounding hills.

Friendly Beaches was shortlisted in my “Best Australian beach Airports” article. It is remote and untouched but still easily accessible in as little as 30 min flight time from Hobart or Launceston.

Friendly Beaches Airfield 122 km northeast of Hobart. The runway is 1000 m long and 6 m wide with the surrounding trees being cleared to 26 meters.

Here is a video of an aircraft coming in for a landing on the strip.

The airfield is privately operated by Freycinet Air who do scenic flights along the coast. They do not charge landing fees for private aircraft. There is no information on the airport in the Australian ERSA but you can find detailed info about the strip on the operator’s website.

It is a 1.5 km walk to Friendly Beach but it will be worth every step.

Fancy landing on a 500m meter strip with cliffs on either end? Welcome to Maria Island which is now a National Park. Before that, it was a hunting ground for Aboriginals, a Penal Colony, and then a small farming community. You will find this island 70 km northeast of Hobart, 4.5 km off the coast.

The island has beautiful sandstone rock formations that are named Painted Cliffs. You can read more about them here and see some pictures.

The airstrip is managed by Maria Island National Park. They ask that you request permission to land there 7 days in advance. Rangers actually live on the island so it is worth complying.

Just to the west end of the runway is Hopground Beach and the old Cement works. If you want to find prettier beaches then it is a 5 km walk to Riedle Bay. The walk takes you past some of the old farms. Many of them have fallen into disrepair.

Tasmanian Devils were introduced onto the island to safeguard the species but unfortunately, it has had an impact on the bird population.

Strahan Airport is located 185 km northwest of Hobart and 144 km southwest of Devonport. It sits 2 km west of the town of Strahan which is famous for being the Gateway to the World Heritage-listed, Franklin-Gordon Wild Rivers and Southwest National Parks.

Strahan Airport’s runway is an asphalt 1220 m long by 18 m wide strip. There are scheduled flights running between Hobart and Strahan a few times a week which gives an alternative to the 4-hour drive.

The airport, like Queenstown Airport, is operated by West Coast Council. Landing is the same $15 per tonne with a minimum fee of $26 and is collected by Avdata.

There has been a detailed feasibility study into the condition of the airport and expansion possibilities. It is an interesting read.

From the airport, it is a 2.5 km walk to the beach. Tasmanians are pretty friendly people so you can probably easily hitchhike as long as you are not too wet and sandy.

Bruny Island Airport is located 39 km south of Hobart. The island itself is 50 km long and the airport sits on the north end. The island has some great attractions and fantastic beaches which you can read more about here.

Bruny Island Airport is the only airport on the island and is owned by the local Kingborough council.

The runway is a 650 m long gravel strip. Landing fees are currently on a donation basis.

There was a lot of discussion about closing the airport due to costs but a not-for-profit trust was set up to take over management of the airport. More information on the airport can be found in the Australian ERSA.

There is a Scenic flight operator that provides tours along the coastline. From the airstrip, it is a 1.5 km walk to the beach. There you will find a lovely beach and a cool rock formation called The Arch.

Lagoon Bay Airstrip is located 51 km east of Hobart, just off the road to Port Arthur (home to Australia’s most notorious Convict Prison and the site of Australia’s worst mass shooting).

Lagoon Bay Airstrip is 550 m long with a parking area at the northeast end of the strip. From there it is a 100 m walk to lovely Lagoon bay.

I went to a fair amount of effort to try and find out who owns this strip but was unsuccessful. The airstrip is registered as an Aircraft Landing Area (ALA) but there is no contact information. I enquired from Air Services Australia so let’s see if they share the information.

Regardless, I wanted to add it because it’s a lovely area with lots of nature trails through the neighboring nature reserves.

Killiecrankie Airport is a private airfield on the north end of Flinders Island. It was the second airport on this list to be shortlisted for the “Best Australian Beach airports“. It is 195 km northeast of Devonport and 337 km southeast of Melbourne.

Killiecrankie Airport has a generous 1600 m gravel runway making it suitable for most GA aircraft.

It is registered as an Aircraft Landing Area (ALA) and operated by Palana Beach House which is 10 km to the north. They ask that you contact them for permission to land.

Oddly the Palana Beach House is next to another airstrip called Sheiling Airstrip that is not currently officially registered as an ALA. No idea what the story is here, maybe it was economical to just maintain the one airstrip and they picked the better one.

From Killiecrankie Airport it is a short 2.2 km walk to Killiecrankie Bay which is a Nature Recreation Area. There are a bunch of lovely Bed and Breakfasts for rent in the area.

King Island is famous for its beautiful farmland and Beef Cattle that fetch some of the highest prices in the country. They also produce great dairy products including famous cheeses.

King Island Airport has 2 runways in use with the longest being an asphalt 1585 m runway. The other is gravel and is only 1105 m long. Detailed information is in the Australian ERSA.

The airport is operated by the King Island council. Landing fees are $15 for <2000 kg and $20 for parking if there for over 6 hours. The airport has security so you need to leave through the terminal.

A 3 km walk away and you will reach the west shoreline. There are lots of pretty beaches, rocks and a few luxury retreats like Shore House which just so happens to have a lovely Sauna and Hot Tub that look out to the rocky coast.

Devonport Airport doesn’t have the nicest beach in terms of white sand, but the surrounding farmland and rural communities are lovely. It is situated right in the middle of the north coast of Tasmania. The airport services the nearby town of Devonport which is 5 km to the west and has a population of 22,000. It also happens to be where the Spirit of Tasmania Ferries (aka retired Finnish Viking Line Ferries) dock from Melbourne.

The runway length of Devonport Airport is 1830 m which is enough to land small regional jets and Turboprops. Almost all of the Commercial Flights out of the airport go to Melbourne. Flight time is around 80 min. This is the official page for the airport.

Devonport Airport is owned and operated by TasPorts. Landing fees at the airport at $29 per tonne and parking fees are $12.50 on the grass. They offer a good deal for the Club members who keep their aircraft at the field. The latest information can be dug out of their Schedule of fees.

The beach next to the airport is called Moorland Beach. As far as beaches go it’s nothing special but the surrounding rural countryside is lovely. The north side of the island and central east coast is where all the farming is done. The west coast is almost all wilderness.

Just 60 km to the west of Devonport airport is another similar beachside aerodrome called Burnie Airport. The town itself is around the same size as Devonport but it’s a bit more built up around the airport so you need to walk through some streets to get to the beach.

The Vale Airstrip is a splendid 1300 m private grass runway at the foot of Mt Roland. Behind the mountain is the start of Tasmania’s west coast wilderness.

The Vale Airstrip belongs to The Vale Farm which produces quality lamb for high-end restaurants. The farm is located 29 km southwest of Devonport on the north coast.

The pristine Dasher River winds its way through the property providing water to the farm and livestock.

There are also several boutique Bed and Breakfast lodges in the near vicinity.

The owners of the farm ask that guests contact them to get permission to land at the airstrip before they visit. At times there can be high turbulence and wind shear due to the mountains so caution is needed.

More info about the airstrip can be found here.

Last on our list is Hobart International Airport, which has been Tasmania’s main airport since it was opened in 1956. It makes it on the list because it sits at the top of lovely Tiger Head Bay and despite the 5 million passengers it serves annually, it has a small footprint.

Prior to Hobart International Airport opening, all aviation was conducted out of Cambridge Airport, which is a mere 1.5 km northwest. Cambridge opened in 1936 and has been servicing the General Aviation community ever since. Private investors now own it and should they choose to close it, there have been discussions to build an additional runway at Hobart International to support GA activities.

At the south end of Hobart Internation Airport’s runway is a pretty beach called Seven Mile Beach. There is a small nature strip between the runway and the beach where people can view aircraft landing.

This ends our tour of Tasmania. If I have missed a great landing strip let me know and I can add it to the list. Right now I am sitting in cold Finland with a meter of snow outside but I hope to one day get to try out these runways. It’s been over 25 years since I was last in Tasmania but I plan to get back there soon.

A big thanks to my fellow blogger Stephen over at Landingareas.com.au who I stumbled across while researching for this article. He writes first-hand about flying in Tasmania and documents the great airports they have.