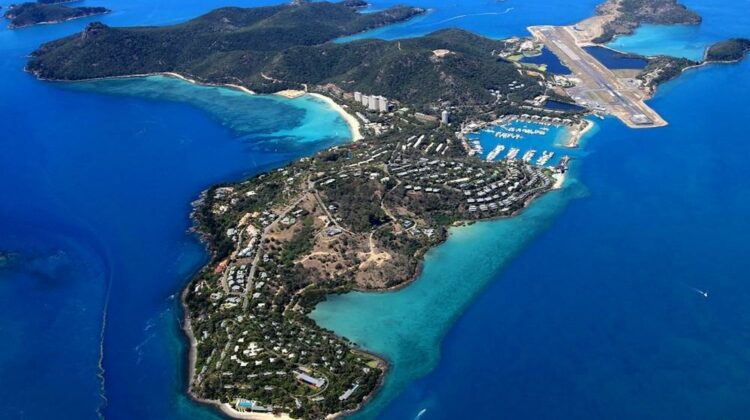 This article is another in my series on Australian Airports. Most of the iconic Great Barrier Reef resorts have fantastic little airstrips conveniently connecting them to the mainland. The airports remain but most of the resorts lie in ruins waiting for brave investors to return them to their former glory.

Growing up in Australia during the 80s and 90s, it was my dream to visit the Great Barrier Reef islands. They were continuously featured on travel shows and sold as paradise on earth. I believed it but weirdly I never managed to visit.

Fast forward 25 years, and it came as a big surprise to me that most of the island resorts that I dreamed about had been destroyed by cyclones, gone bankrupt and/or been sold to the Chinese. With cheap flights to Bali and the high cost of Australian Labour, the economics just don’t seem to be there anymore.

Some of the Islands have managed to bounce back by focusing on High-end tourism but most have discovered that it’s a difficult road back. Today’s stringent Environmental regulation and Community consultation mean long delays and significant upfront investments that will most likely never pay back.

Enough of the gloom and shattered dreams, let’s jump into it and see what’s going on in 2023.

Featuring first on the list is Lizard Island which is about as far from affordable as you can get but it has successfully marketed itself as a High-end Eco resort that is popular with celebrities and those who can afford to visit.

Situated 250 km north of Cairns and 34 km off the coast, this tropical paradise, and national park get comparatively few visitors compared to some of the other islands and it is like that by design.

The Lizard Island Luxury resort which runs the island has only 40 rooms which go for between $2500 – $6500 a night. The resort was bought back from the Chinese in 2021 by Billionaire Mining Tycoon Andrew Forest for $42 million AUD.

If you are planning to take your aircraft to Lizard Island, it has a paved 900 m runway with no obstacles which should be manageable for most Piston Aircraft and Turboprops. Landing and parking fees are $300 but the good news is it is free if you stay at the resort.

Hamilton Island sits in the middle of the Whitsundays Island Group. It has managed to be successful by being accessible and achieving a certain economy of scale. The island is easy to get to by private aircraft or scheduled commercial flight from Melbourne or Sydney.

On Hamilton Island itself, there is a nice beach to the east of the runway called Catseye Beach. There are plenty of bars and restaurants around as well as accommodation.

The runway is 1765 m long and 45 m wide making it suitable for regional jets. Landing slots for GA aircraft need to be booked in advance. Landing fees and parking are reasonable (under $100) given the nature of the airport.

Be sure to check out the spectacular Whitsunday Island to the north and Dent island which is a golf course to the west of Hamilton Island.

I can’t help thinking that only a pilot would think to cut a lovely little island in half like that with a runway. This 600 m grass strip is located 81 km east of the town of Agnes Waters (the most northern surf beach in Australia) and 84 km northwest of Fraser Island.

Surrounding the island is a corral reef and the beach is made up of broken coral and not sand. The island is famous for good diving.

The island has a history of exploitation when it was mined for Guano (petrified bird poop used in gunpowder) which destroyed the vegetation on the island.

Things have improved for the better now thanks to a comprehensive conservation effort. An Eco resort now operates from the island and as there is no natural drinking water, the resort desalinates seawater.

Unfortunately due to the conservation plan, private planes cannot be taken to the island. The only approved operator is Sea Air Pacific which operates daily flights to the island from Bundaberg, Harvey Bay and a few other locations with their Cessna 208 Caravans.

Great Keppel Island is located 15 km off the east coast near Rockhampton which incidentally was the winner of our best climate in Australia study. The island is about twice the size of Hamilton Island, coming in at just under 1500 hectares.

The island currently has a nice 875 m paved runway that is in use according to one of the other resorts on the island.

Great Keppel Island has had a complicated past. It was settled for sheep grazing 1800’s and the local aboriginals inhabiting the island were gradually kicked off. In the 70s tourism took off on the island hitting a peak in the 80s. The island marketed itself as a big party destination with the slogan “Get Wrecked at Keppel”.

As travelling abroad to party became cheaper the island struggled to make money and in 2008 the main resort was closed by its owner.

There was a big Master plan to completely redevelop the island into another Hamilton Island for the rich and famous but fortunately, it has stalled due to government bureaucracy and a lack of investors.

Some people might think that taking a beautiful island and turning it into an 18-hole golf course mega-resort, international airport, and high roller casino is the way to go but it doesn’t appeal to me – modest, sustainable and affordable is more my thing.

Palm Island is located 50 km north of Townsville and is 25 km off the east coast. It is 5500 hectares in size (7.5 times bigger than Hamilton Island) and has a peak of 548 m which makes it the second tallest Queensland island after Hinchbrook Island, 35 km to the northeast.

Palm Island has a dark past as an Aboriginal penal settlement – Aboriginals from across Queensland were shipped to the island between 1914 and 1974. Today the island has around 2500 inhabitants of which 97% are Aboriginal and Torres Strait Islanders.

Tourism has never taken off on the island with one contributing factor being a lack of interest from the local community. The island has potential though as there are some nice beaches including Pencil bay beach which is just to the west of the airstrip.

The airstrip on the island is just over 1 km long and 16 m wide. It is serviced by Hinterland Aviation with as many as 23 flights a day to and from Townsville. They operate Cessna Caravans and the flight time is just 25 minutes. It is also possible to visit by private aircraft. The current council fee is $110.

Dunk Island is a 970 hectare tropical paradise 4 km off the coast of Mission Beach and 120 km south of Cairns. A luxury 147 hectare resort with 9 hole golf course that was built on the island in the 80s was first damaged by cyclone Larry in 2006 and later destroyed by cyclone Yasi in 2011.

After a long string of attempts to sell the island, it was recently purchased in 2022 for 25 million AUD by Annie Cannon-Brookes, the wife of Atlassian billionaire.

The airstrip on the island was originally built by the Australian Air Force in 1941 during world war 2. The land the airstrip sits on today belongs to the resort.

The length of the airstrip is 800 m by 16 m. Permission to land on the strip needs to be sought from the new owners.

75% of Dunk Island is a National park and can be explored via well-marked paths. Most of the vegetation has now recuperated from the cyclone.

Club Med obtained a lease and built a resort on the island in 1992. The resort was originally aimed at singles but in the latter end of the resort’s life, they switched to focus on families. The resort closed its doors in 2012 and has remained closed ever since.

The resort was bought by a Chinese company soon after for $12 million but redevelopment plans have not moved forward.

The island has 2 grass airstrips that were built by Club Med. One is 1000 m long and the other is only 670 m. Due to the fact that the resort has been closed for over 10 years, it is difficult to know what state the airstrips would be in. Permission to use the strip would need to be sought from the leaseholders.

There is a nice beach at the north of the runway called Gap Beach which is far away from the resort.

A further 45 km south of Lindeman Island and about the same distance north of Mackay is Brampton Island. The island sits about 26km off the coast.

Brampton Island Resort is yet another abandoned Queensland resort that closed its doors for the final time in 2010. Most of the buildings lie in ruin. There was a plan put forward to redevelop the island in 2011 but it never eventuated.

The 800 m airstrip on the island predates the resort and was constructed in 1965. Since its construction, there have been 6 accidents. The more recent 5 are documented here.

At both the north and south end of the runway, there are nice little beaches to enjoy a swim.

Keswick Island is located 15 km southeast of Brampton Island and 35 km from Mackay. The island has not been spared controversy since Chinese investors bought out the main lease in 2019 for $20 million.

As the main leaseholder, the Chinese need to provide services like a ferry connection to sub-leasers and other tourists. There are around 130 sub-leases on the island.

Locals have been screaming that they are being restricted from using the airstrip, and local boat ramp and have complained that the Chinese developer has been disrupting fragile turtle nesting areas.

As it is now only one operator is allowed to use the 520 m airstrip for safety reasons. From the look of things, there doesn’t seem to be a lot of room to park aircraft anyway.

The beaches on the island are magnificent, especially Basil Bay Beach pictured above. The island is 530 hectares in size with 117 hectares being leased and the rest belonging to the South Cumberland Islands National park. The main website for Keswick Island is here.

As you saw there are some gorgeous islands here and some very nice little runways. It will be interesting to see what happens over the next few decades with these islands. My personal hope is that things will move more towards smaller leaseholders permanently settling on the island, and more boutique private accommodation being offered. This would put more focus on lifestyle than profit and hopefully make these islands more accessible to people, especially us pilots!