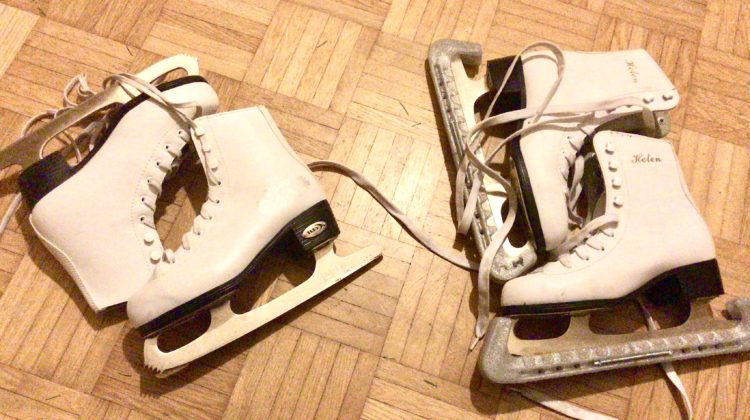 If like me you have been thrown into parenting in Finland, and are trying to make sense of kids winter hobbies, here is some useful information to get you started. We will keep it simple here and just look into the usual suspects, Ice skating and Skiing.

Most kids already know how to skate quite well having attended classes during the preschool years or earlier. 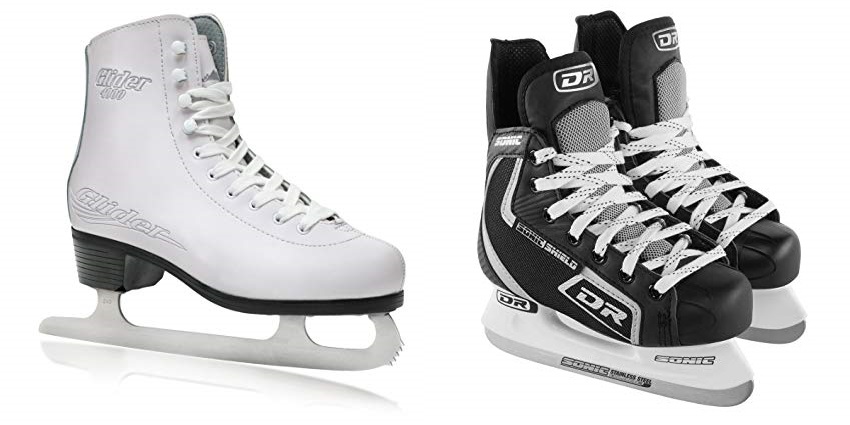 Let’s start out with the cheapest and easiest to understand.

Boys generally use the Ice hockey style and girls use the figure skating style. The sizes generally run similar to the shoe sizes.

It’s next to impossible to get two seasons out of a pair of skates as the kids grow so fast.

It can be a good idea to buy the skates big enough to fit a thick pair of woolen socks underneath. This is especially valuable in cold weather.

Brand new, girls skates start at around €30. Boys skates start at €40. The more you pay the better the skates will usually fit and the more comfortable they will be to wear. Second hand skates usually go for €20 to €30 depending on the brand.

I usually buy the skates second hand because you can get better quality skates for less than the cheapest new alternative and they are usually warn in so more comfortable from first use. After a sharpen they are good to go.

Taking it to the next level – Ice Hockey and Figure Skating

Most boys in Finland play a bit of Ice hockey with their friends but if you get them started in a club you can kiss goodbye to your weekends and your wallet. Figure skating is even worse, mostly because you are hiring the rink for very few people and the instruction is expensive. So far my kids have been happy to just kick around with friends, let’s see if that continues…

When kids start skiing they are usually given whatever skis sort of fit which often leads to an experience not much different to wearing snow shoes. To be able to properly ski they need the skis that actually fit.

Cross country skis should be 15-25 cm longer than the person. They are meant to have a certain stiffness, depending on the skier’s weight.

To fit the ski the center of balance of the ski is found and the skiers toes put behind that line. The skier is then asked to stand equally on both skis and a 1 mm piece of perspex is run under the ski.

When the skier stands on one foot the arch should disappear and the perspex should be clamped down and not be able to move.

It is a good idea when going to get skis professionally fitted that you measure the person’s weight and height beforehand as this will speed up the process.

When buying new skis it is a good idea to have them professionally waxed for the first time. They will need to sand down where the grip wax goes and then put on normally 5 layers of wax. 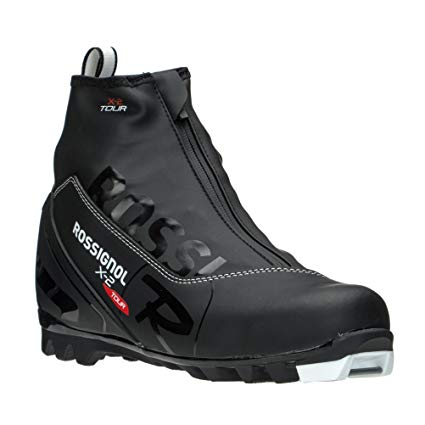 Ski boots are much like normal shoes – they either fit comfortably or they don’t. It is important to pay attention to the boot binding type as there are several different types. The NNN boot type is a common and good binding.

A good boot should be firm but comfortable, especially around the heel and toes. Laces do not usually have to be tied very tight as the boots themselves are elastic and stay on well.

The boots connect to the binding at the toe and pivot. If possible, choose a binding with the manual lever at the front as they hold the skis on much better and are easier to put on when the boots and skis have ice jammed in them. 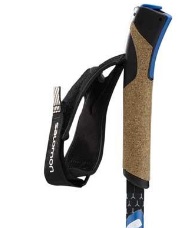 Ski poles should come up to the very top of the arm pits (.8 of the person’s height). It is best to get them with a hand brace which relieves tension from holding the poll on the push stroke.

Polls should be stiff and light, being easy to carry and allowing the transfer energy into the ground without flexing too much.

An easy to grip handle is nice with and decent sized basket at the end to stop it digging too deep into soft snow.

It’s pretty easy to pick up second hand boots for €30 and polls for under €10 but finding skis that fit well can be difficult. Second hand skis will usually set you back around €60 and come with the binding.

You can buy new boots for kids for upwards of €70 and polls north of €20. Skis new professionally fitted with bindings can be as cheap as €100 if you search out last year’s models. If you opt for fancy waxless skis you can expect to pay a lot more.

I usually buy boots and polls second hand but will buy skis new for the kids if I can’t find anything good in the second hand shops. We ski a lot as a family so I don’t mind spending the money. And very often you can get two seasons out of a pair of skis before the kids grow out of them. 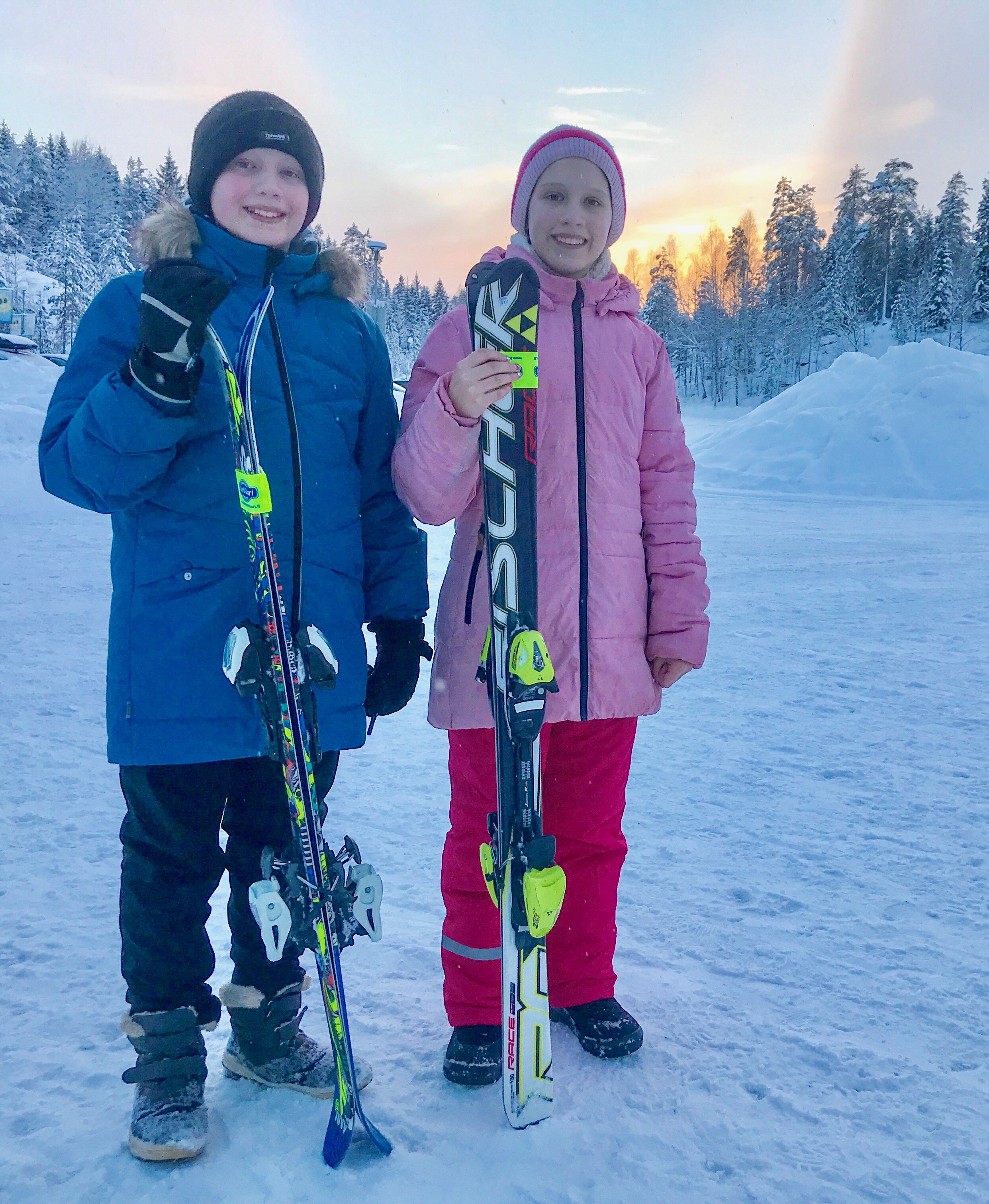 Downhill skiing is the most expensive of the winter hobbies, but at the same time probably the most fun.

As a general rule, kids can ski with shorter skis but will have trouble turning with longer skis. Appropriately sized Downhill skis should come to around the skiers mouth. Any longer than the person’s nose and they are too long. Much shorter than the chin and they are too short.

More experienced skiers may opt for skis that are longer as they are more stable at speed.

Standard skis have a raised tip and a flat tail (right skis). Freestyle skis are raised on both ends (left skis). For kids it doesn’t make much difference unless they want to start skiing backwards or doing tricks.

More expensive skis have the laminate better sandwiched into the ski. They also have a finish on the base that requires less waxing. With skis the stiffer the better. Also a good edge is needed to cut into the snow. 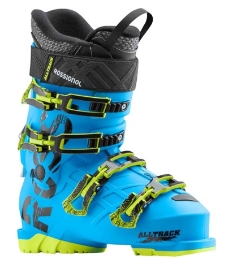 Ski boots are measured in centimeters (length of boot) which has no correlation with regular shoe sizes. They need to fit well. When putting them on the toe should touch the front and come slightly back when the heel goes into the heel pocket. If the skier’s foot is able to move around in the boot it will be hard for them to put pressure on the ski to turn.

Boots have a flex rating which should be between 60 and 90 for kids. The heavier a person is the more the flex rating is important. I need 90 or greater. Competition skiers usually use boots with a flex rating of 130. 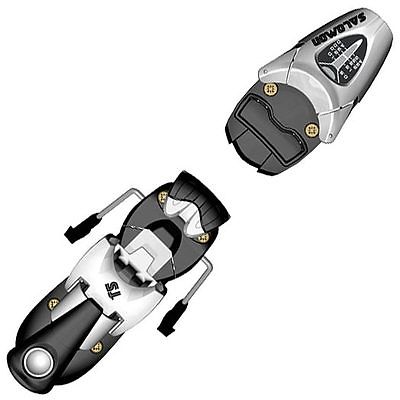 Bindings are pretty standard but they must be adjustable for just under the skier’s weight. They should also be adjustable to the size of the boot. It is worthwhile getting them properly adjusted if you are unfamiliar doing it yourself. 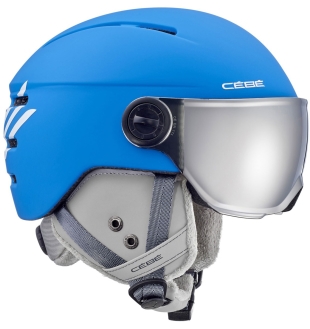 For downhill skiing poles are optional for kids. I haven’t bothered with them yet. A good fitting helmet and ski mask are a must for protection and also to keep the ears warm. Some helmets have the mask built on which can be a good option for beginners who want the option of flipping it up.

Band new downhill skis can easily start at €250. The boots are about the same. For me it is not an option to spend €500 per kid so I always buy second hand.

Second hand downhill skis can usually be found for around €70 with bindings. Boots are usually under €50. Second hand helmets are about €25.

Best places to get the gear

There are some good options to buy gear in Finland – sport is a big part of the culture. There is an abundance of kids equipment available. 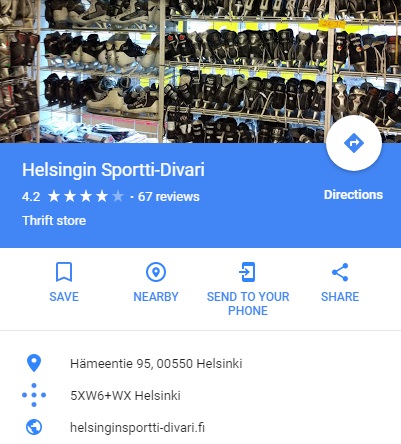 If you want to buy second hand the best place to buy from is Sportti-Divari in Helsinki. They have a lot of options to choose from and you can try everything on there in the shop.

The downside is that the staff are always busy and it can be hard to get service. They close early (18:00) and also only accept cash. They do trade in your old stuff for about 1/3 of the price you paid.

Tori.fi and facebook marketplace are options too but it takes a lot of time to coordinate a meet up with a seller only to have the stuff not fit.

XXL and Intersport are the best two sporting shops to visit. The staff are professional and can properly fit equipment. I usually shop around to see which one has the best deals. They do especially good deals towards the end of season.

Prisma and Citymarket might be marginally cheaper but it is almost impossible to get professional advice which makes it my last choice unless I know exactly what I want.

Peuramaa ski resport in Kirkkonummi (peuramaa.fi) and Serena ski resort in Espoo (serena.fi) often rent out their old Downhill ski equipment for the season for around €99. The gear rents out quickly so you need to be fast at the beginning of the season. They also often sell old equipment too but it is often well used and not that cheap.