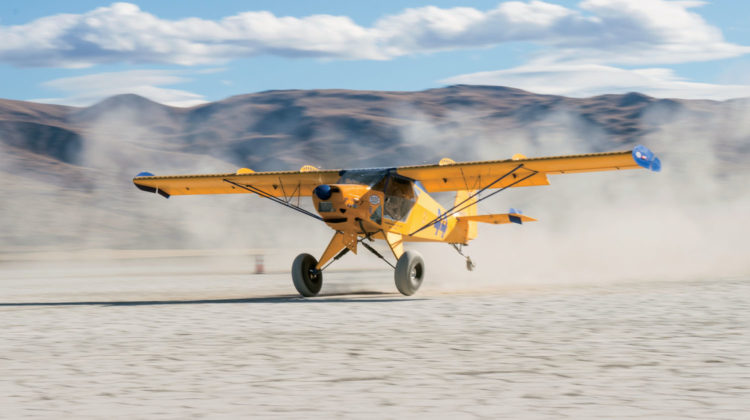 If you like flying low and slow it doesn’t get much better than a bush plane. Short take-off and landing (STOL) performance opens up a lot of possibilities to visit back strips and experience places that are not always so accessible.

Most of the 2 Seater Bush Plane options available are either Ultralights (if commercially produced) or Experimental (if built from a kit). The planes are usually constructed from steel tubing, aluminium sheets and fabric, which are cheaper and less complicated to build than composite aircraft.

Bush planes generally have a tailwheel configuration due to it being more rugged for off-field use. Most of the planes in this list also have tri-gear options. I have focused on models with side-by side seating. Let’s take a look at the aircraft on the list and see how they compare.

The most popular kit bush plane is produced by kitfox in the USA. It is a steel tubing, fabric fuselage and wing, experimental aircraft. It usually comes with Alaskan bushwheels and has foldable wings to easily be stored in a conventional garage.

There is also a decently decked out factory built option for €165,000 if you want to save yourself 1000 hours of building. Most of the kitfox aircraft that come up for sale are selling within hours so if you want one of these have your money ready.

Just Aircraft USA design their planes to fly slower and land shorter than your average bush plane. The first thing to notice about the aircraft is the rugged hydraulic suspension and 29 ” Alaskan bushwheels that are designed to take a lot of abuse.

Different from most bush planes is the all metal wing with self deploying leading edge slats, enabling the aircraft to land at a low speed of 28 knots.

The superstol takes their Highlander airframe and adds the specialized wing described above. The Firewall back kit is around €41,000 and the engine, prop, exhaust and cowling are €29,000 for a Rotax 912 ULS. Avionics usually cost around €15,000 and €3000 would be needed for the Alaskan Bushwheels. There are also 3 quick build options on the wings ranging from €1500 – €5500. Expect to pay another €5,000 for some nice extras.

The Eurofox is designed and built in Slovakia and sold as an Ultralight. The aircraft is almost identical to the Kitfox but is slightly smaller. (62 cm shorter wingspan, 30 cm shorter length, 2cm wider cabin) including the steel tubing frame and fabric covering.

The Eurofox like the Kitfox can be sold in both nose wheel and tailwheel configuration. For the taildragger version, Eurofox only offer the aluminium spring gear where Kitfox offers an additional option of Cabane V gear(more rugged).

The advantage of the Eurofox is the price. It comes factory built for around €80,000 which is a very good deal. Fancier avionics and some extras might push the price up another €10,000 but still it’s almost half the price of the factory built Kitfox.

Eurofox is marketed as Aerotrek in the USA which while practically identical are sold at a higher price point.

The American built S21 Outbound is an all metal taildragger similar to the Just Aircraft Superstol. Where it differs from the Superstol and other planes on this list is that it flies faster due to its more aerodynamic structure (105 knots with standard 100 hp Rotax 912 ULS).

Take-off and landing rollout numbers are not that impressive at 106 meters, but that is the penalty of flying fast. Stall speed is 35 knots. Fuel capacity for the aircraft is a staggering 189 liters, giving an endurance of 6.5 hours and range of 1500 km.

After reading over the numbers and capabilities of the aircraft one gets the feeling the aircraft has more in common with a Cessna 170 or 180 rather than most of the bush planes on the list.

As a Kit aircraft the base kit is €30,000 without instruments and engine. All up one could expect to spend around €100,000 on the aircraft and according to the producer about 500 hours on the build.

The American designed STOL CH750 is a popular nose wheel all aluminium ultralight. Similar to the Just Aircraft Superstol, it has leading edge slats which improve slow flight performance. It also has rugged tundra tires and solid aluminium sprung suspension. Similar to the Kitfox and Eurofox, the CH750 has Flaperons instead of the conventional separate flaps and ailerons.

The CH750 is a kit built aircraft and an evolution of the original CH701 which was smaller and had a lower MTOW. The CH750 is designed for the 600 kg MTOW category. Empty weight for the aircraft is 350 kg, leaving a useful load of 250 kg.

Take-off roll with the aircraft is 30 meters with an initial climb rate of 1000 fpm. Cruise speed is 80 knots with a stall speed of 30 knots. Cabin width for the CH750 is 106 cm. There is a good amount of space behind the seats for carrying luggage but due to the position of the center of gravity, only 36 kg can be carried.

Total price for the kit including a Rotax 912ULS engine and some instruments is close to €75,000.

The A-22 Foxbat is a Ukrainian built tri-gear STOL aircraft. Similar to the CH750 it has an aluminium fuselage but the wings of the foxbat are fabric covered, similarly with the Kitfox and Eurofox.

The aircraft is being sold new and ready to fly for around €80,000. Due to its low cost, aesthetic appeal and ease to fly it has become very popular, especially in Australia and the UK.

The Bushcat is a South African produced fabric and steel tubing aircraft. It runs on either an 80 hp Rotax 912UL or 100 hp Rotax 912ULS engine. It is available as a tri-gear or taildragger. Specifications for this aircraft are similar to the Foxbat above.

While this aircraft is not the most rugged on the list it comes out as one of the cheapest. Selling price for the aircraft is around €65,000.

I have excluded the Tandem seaters like Carbon Cub, Aviat Husky, Zlin, RANS S7 Courier and Bearhawk LSA as I prefer side-by-side seating, but those aircraft are fantastic and deserve their own article.

I also excluded older planes like the Piper Cub, American Champion  (Bellanca), Cessna 120, 140 and 150 in order to focus more on new innovative designs.

Some less well known aircraft like BRM Land Africa and Citius, CP Savannah, and Murphy Rebel have also been excluded to keep the article to a manageable size.