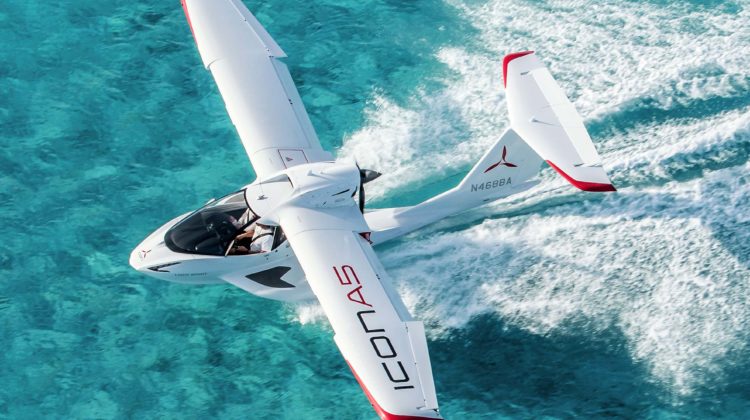 Today we are looking at what we refer to in Europe as Ultralight Seaplanes (LSA Seaplanes in the USA). This list is dominated by monohull designs. Strangely, I was only able to find one factory built ultralight aircraft offering floats as an option. There are however many aftermarket float options available for just about every ultralight aircraft. I have listed the float options I found in a separate article.

Seaplanes are permitted now by new EU regulation (if National regulators opt for it) to fly at 650 kg instead of the 600 kg limit. This is sensible because the hull/floats add weight while at the same time generating some lift. All of the monohull aircraft mentioned here offer cruise speeds around 80 – 95 knots, climb rates at 600 – 1000 fpm and have fuel consumption close 20 liters per hour.

I have organized the list according their wow factor.

Without doubt the US produced Icon A5 is the most sexy monohull on the list and also the most expensive. It also holds the title for having the highest sales. Icon designed the aircraft to be easy to fly. The cockpit more resembles a car dash than what it does your regular aircraft. It has a unique angle of attack indicator in lieu of an attitude indicator.

The airframe is a composite design and boasts a spin resistant design made possible by wing cuffs, vortex generators and other aerodynamic features. The wings also rotate and fold rearward for compact storage. The Icon A5 runs a 100 hp Rotax 912ULS engine. A BRS parachute also comes standard.

The current starting price for the Icon A5 is a whopping $359,000 USD which is a 50% increase on previous years. Apparently there is no shortage of demand with a waiting list that extends into the thousands.

There have been a number of Icon A5 crashes and some of them with very experienced pilots. All accidents thus far point to pilot error and reckless flying. One of these more high profile cases is analysed here by Avweb.

The Brazilian produced Super Petrel is a fully composite aircraft with a unique bi-wing design. The key advantages of the bi-wing is that it does not require flaps and enables a shorter wingspan. The lower wing has a higher angle of attack which gets the plane off the ground in as little as 130 meters.

Landing gear for the aircraft tuck away nicely into the wings and nose and are operated by a simple cable mechanism. In the case of an inadvertent gear down landing in water the aircraft stops quickly but does not flip which is a great safety feature.

The aircraft in its standard configuration comes with a Garmin G3X touch panel and Rotax 912iS and sells for $189,000 USD. In cases the Super Petrel needs to be operated at higher altitudes, turbo options can be ordered. There is a cool video here fully introducing plane.

Also from Brazil is the the composite SeaMax. It has a 100 hp Rotax 912ULS  mounted on top of its fabric wing with struts. There is an option to have a folding wing for compact storage and/or the more efficient fuel-injected 100 hp Rotax 912iS engine. Both of these options add $10,000 to the price respectively.

On the water there is a deployable water rudder to help with water taxiing. For use on land the gear is extended using an electrical system. On ground the front wheel is free casting and direction can be controlled with the rudder or light use of the brakes.

Like the Super Petrel, the SeaMax has the rear wheels mounted back far enough to prevent the aircraft from flipping if accidently landed on water with gear down.

The SeaMax has a large bubble canopy offering the best visibility in class. The cockpit has a shared center stick and individual throttles. The Deluxe version comes with Garmin G3X touch panels and sells for $168,500 USD.

The SeaRey is a US produced composite seaplane with a fabric wing and tail section. It has an amphibian taildragger configuration with the main gear rotate upwards and not tucking into the hull as with other models previously viewed.

The SeaRey has been around the longest of all the designs on the list and has around 800 flying around the world. It is also the second highest selling aircraft in the US, after the Icon.

There is an Adventure and an Elite version available with either the Rotax 912ULS carburetted, 912iS fuel-injected or 914 turbocharged engines. The Elite version has the Garmin G3X panel and is priced at $169,000 USD

The Aventura II is a US kit built aircraft which can be completed in as few as 350 hours. Similar to the Searey it has a fabric wing and tail section and tailwheel configuration. The aircraft has several engine options including the usual 100 hp Rotax 912ULS.

Take-off roll on water is a decent 106 meters and climb is an impressive 1000 fpm but cruise speed is a very modest 65 knots. The aircraft kit sells for around $49,000 USD without engine or avionics so realistically one could expect to spend close to $100,000 USD to get one flying.

Finally a European aircraft on the list. The Amphibius Sirius comes factory built and ready-to-fly from the reputable Czech manufacturer, TL-Ultralight. This two seater cruises at around 90 knots with floats and weighs 395 kg empty which is a bit on the porky side. Still with the new 650 kg MTOW this leaves a manageable 255 kg for fuel and occupants.

The Sirius has a roomy cockpit with ample space behind the seats for luggage. The aircraft comes with leather traditional yokes and a very nice glass panel with Dynon 10″ touch displays. Other avionics options are also available.

The amphibian floats are operated by an electrical system with a simple toggle switch. The aircraft with floats is offered for €159,000 ready to fly.

Aircraft in Concepting or Testing

The Aurora comes from northern Finland. It is a wood design with a forward opening canopy. The prototype aircraft they were testing with had an accident when the canopy opened in flight. The aircraft crash landed, caught on fire and was destroyed. Fortunately no one was hurt in the incident.

The MVP Aero is a similar concept to the Icon A5. The main difference being that it is designed to double up as a camper and fishing vehicle with seats that fold to make a sleeping area. So far an engineering mock up has been made but not a flying prototype.

The Vickers Wave concept comes from New Zealand and closely resembles the Icon A5. It has been in concepting for 11 years with not much more than a mock up to date.