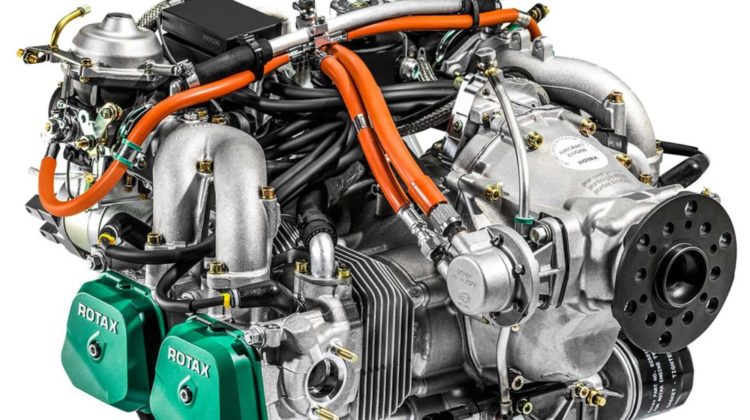 The introduction of the Rotax 900 series engines starting in the late 80s was a big game-changer in the 2 seater market. These engines were modern four-stroke engines running on auto fuel. They were half the weight of traditional aircraft engines and cost 1/3 of the price to purchase. Maintenance was also easier so it’s no wonder that they took the lion’s share of the 2 seater market.

At first, the engines were treated with a fair amount of scepticism, especially in North America. People were used to traditional air-cooled engines that revved at maximum 2700 rpm.  The Time Before Overhaul (TBO) numbers were also low (600 hours) but these soon came up to be on par with other engines.

In 1999 the  912ULS 100 HP came along which is today the most common Rotax aircraft engine. The 1352 cc, 4 cylinder generates its full horsepower at 5800 rpm (limit 1 min). It uses 2 carburettors and has a reduction gearbox with a ratio of 2.27:1 – giving a maximum propeller rotation of 2555 rpm. (Propeller tips need to stay below sound barrier)

75% power is at 5000 rpm which is maximum Torque, but many people save fuel and cruise around 4200 rpm. (click to enlarge the picture below)

The weight of a 912 ULS is a staggering 56.6 kg – that’s half the weight of a comparable Lycoming O-235 weighing in at 114 kg. Time Between Overhaul (TBO) of the Rotax engines is 2000 hours is on par with traditional Lycoming and Continental.

The list price for the 912ULS engine is around €18,000, the certified version is a bit more. Compared to the Lycoming O-235 mentioned above with a list price of €70,000, you can see why the Rotax are popular. 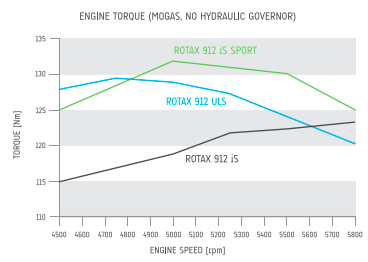 The most exciting Rotax engine debut was the 912 iS 100 HP in 2012. It introduced fuel injection and Electronic engine management,  adding an extra 6 kg to the engine weight but shaving 30% off the fuel consumption. The version available now is the 912 iS Sport, introducing better per and torque curves, with even better fuel efficiency.

Most of the above-mentioned engines have certified equivalents. Prices are a bit harder to find on these as Rotax sells directly to the aircraft manufacturers a guess would be €5-10K more than their experimental counterparts.

Rotax know their niche and that is where they are staying for now. It will be exciting to watch in the future how much more powerful and fuel-efficient they can make their engines.